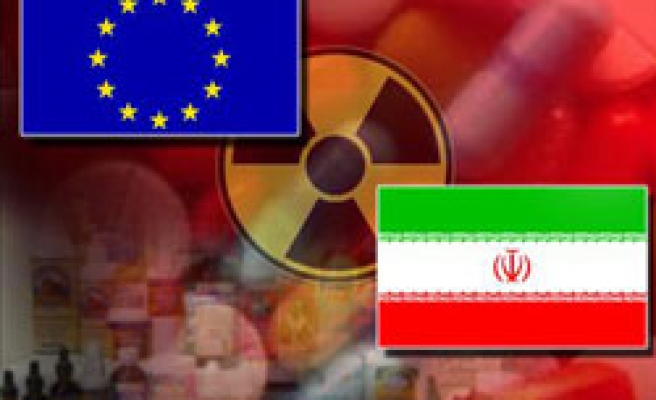 The new sanctions come as Iran said, it is ready to hold negotiations with world powers on its nuclear program in early September after the end of the holy month of Ramadan.

The extra sanctions, which also limit dealings with Iran's state shipping company and air cargo transporters, will not legally come into force until they are published in the European Union's official journal on Tuesday, diplomats said.

"The annex is extremely detailed and sets out precisely which Iranian entities -- banks, insurance companies, shipping and cargo lines -- are blocked," one diplomat said. "Once it's published, there is a legal obligation to comply."

Perhaps the hardest-hitting element of the sanctions is the move to prohibit new investment in and technical assistance to Iran's refining, liquefaction and liquefied natural gas sectors, which are a mainstay of Iran's energy-based economy.

The new EU sanctions include a ban on the sale of equipment, technology and services to Iran's energy sector, hitting activities in refining, liquefied natural gas, exploration and production, diplomats said.

The EU is also banning so called "dual-use goods". It will also bar Iranian-connected banks operating in the EU from setting up branches.

Traders said this month Iran was depending more on friendly countries for fuel supplies to avoid sanctions intended to hinder its fuel imports, and was buying about half of its July gasoline imports from Turkey and the rest from Chinese sellers.

Earlier on Sunday, Turkish Foreign Minister Ahmet Davutoglu said that the Iranian party had confirmed Iran was ready to start negotiations with Catherine Ashton, the EU foreign affairs chief as the representative of the P5+1 (five permanent members of the U.N. Security Council, the United States, Russia, China, Britain and France, as well as Germany).

The Iranian foreign minister said that they wanted Turkey and Brazil to join the talks between Iran and Vienna Group.

Turkey, Brazil and Iran signed the Tehran Agreement in May. Under the deal, Iran agreed to transfer 1,200 kg of low-enriched uranium to Turkey within a month and in return receive, within a year, 120 kg of 20 percent-enriched uranium to keep Tehran's medical research reactor running. But, the UN Security Council imposed a fourth round of sanctions on Iran in June. Brazil and Turkey voted against the sanctions.

Turkey says Iran to respond to Vienna Group on Monday