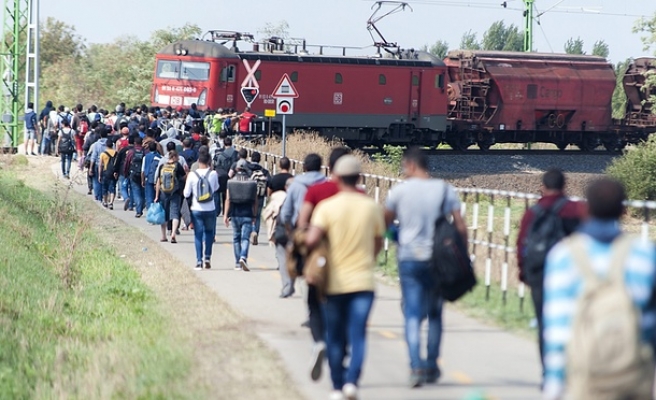 European Union members were on collision course on Monday over proposals to distribute asylum-seekers across the continent, a plan back by safe-haven Germany but resisted by several ex-Communist states in the east.

Interior ministers will meet on Monday afternoon in an emergency council called to deal with the unprecedented influx of refugees, which has overburdened Italy, Greece and Hungary.

Diplomats said after talks in Brussels on Sunday that Hungary, Slovakia and the Czech Republic were refusing to accept the compulsory distribution of 120,000 asylum seekers - even though Hungary, which has taken in large numbers, would benefit.

Renewed discussions on Monday morning did not produce any breakthrough either. One diplomat said Lithuania and Romania had also expressed unhappiness with the scheme that would oblige them to take in thousands of refugees fleeing violence and oppression in Iraq, Syria or Eritrea.

"I don't have the idea that we will get agreement at ministerial level," the diplomat said, adding that meeting may just result in vague words on future relocation of refugees.

"The biggest question will be if there will be a wording on quota system and how it will look like," said another.

European Council President Donald Tusk said on Friday he would summon EU leaders for an emergency summit if their ministers could not agree a solution. However, some governments question the value of such a meeting before interior ministers meet again for a regular council on Oct. 8.

Among arguments EU and German officials have used to press eastern leaders who say their societies cannot take in large numbers of imrefugees have been warnings that failure to fix a common plan on migration could wreck the Schengen open borders system which is especially valued in formerly communist states.

Germany upped the pressure on eastern states on Sunday by reimposing border controls with Austria after acknowledging it could scarcely cope with thousands of asylum seekers arriving each day.

Home affairs ministers will first receive a briefing by a number of EU and United Nations bodies, such as EU border agency Frontex and refugee agency UNHCR, about the latest information on migratory flows.

They will also hear a presentation by the European Commission on its new proposals to redistribute asylum seekers across the bloc.

An earlier plan to relocate 40,000 from Italy and Greece is expected to be given a legal green light by ministers, partly because it is voluntary - a result of EU leaders blocking a Juncker proposal for mandatory quotas in June.

Diplomats said that Hungarian objections to the separate Juncker plan to relocate 120,000 from Italy, Greece and Hungary meant that the wording of the proposal would no longer specify from which countries asylum-seekers would be moved.

Talks among EU envoys had also led to tougher wording on plans to deport unwanted refugees and tighten defenses of the bloc's external borders - demands especially of eastern states.