Brussels wants Athens to treat incoming asylum seekers better, so that they can be sent back refugees who had originally landed in Greece 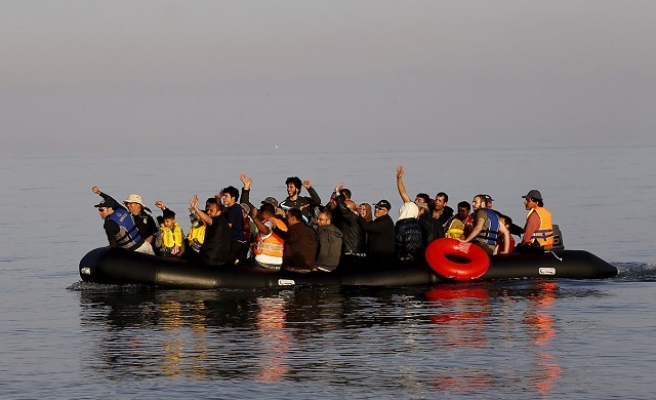 The EU piled pressure on Greece on Wednesday over Europe's refugee crisis, telling Athens to improve conditions for refugees and to shore up its borders or risk a suspension of the bloc's passport-free zone.

Brussels said Athens must treat asylum seekers better so that other overstretched European Union states can send back refugees who had originally landed in Greece, in line with EU rules.

Greece is bearing the brunt of concerns that the failure to deal properly with the biggest movement of refugees to Europe since World War II threatens the very fabric of the 28-nation bloc.

EU migration commissioner Dimitris Avramopoulos, unveiling a report on the crisis ahead of a summit next week, urged Greece and other states to do more before a new surge of refugees expected this summer.

"We have lost time already -- this is a fact. And this is not acceptable," Avramopoulos told a news conference at the European Commission, the executive arm of the EU.

The EU's Dublin regulations on migration say people must apply for asylum in the country where they first land, but that system has been thrown into chaos by the conditions in Greece.

A ruling by the EU's top court in 2011 at the height of Greece's debt crisis said conditions for asylum seekers in Greece were degrading, meaning that other countries could not send them back.

"There are still key areas in the asylum process that need to be improved before the Dublin regulation can be fully applied to Greece again, notably in the areas of reception capacity and conditions, access to the asylum procedure, appeals and legal aid," the Commission said.

EU states are due next month to debate changes to the Dublin rules.

If Greece fails to comply with the recommendations, Brussels could authorise EU member countries to exceptionally extend border controls within the Schengen area -- including with Greece -- for up to two years.

Greece has been told to improve registration procedures, including making sure refugees are properly fingerprinted and their documents checked against security data bases.

The envoys nodded through the plans, which must get final approval from EU ministers on Friday, European sources told AFP.

EU ambassadors in Brussels have, meanwhile, backed demands by the Commission for Greece to secure its sea and land border with Turkey, the access point for around 80 percent of refugees to Europe.

Berlin, Athens and Ankara have asked NATO to begin surveillance of the Aegean sea to provide a "clear view" of how people-smugglers are operating on the Turkish coast.

"Germany, Greece and Turkey made a communal request for a surveillance mission in the Aegean sea," a German government source told AFP on Wednesday.

The head of NATO has said he will give "very serious" consideration to the plan, which would be a first time the alliance has got involved in Europe's refugee crisis.

But anger is growing in Greece too, with hundreds of people on the island of Kos protesting on Wednesday against plans to build a refugee registration facility voicing fears about its impact on tourism.

"No to the hotspot on our island," read the banner leading the demonstration by traders and tourism business owners, referring to the facilities the EU wants built on the island of 30,000 inhabitants.

Avramopoulos, a former Greek minister, had earlier called on both Greece and Italy to "urgently" complete all the planned hotspots on their territory -- with Greece having completed just one of five.

The criticism is certain to anger Italian Prime Minister Matteo Renzi, who on Wednesday compared the EU to the orchestra playing on the deck of the ocean liner Titanic.

Avramopoulos also hit out at European Union members for dragging their heels on easing the refugee burden for Greece and Italy. Just 479 out of a planned 160,000 people have been relocated to other states so far.

The migration crisis has pushed key tenets of European unity such as the Schengen free travel area and the Dublin migration agreements to the brink of collapse.

The EU has pinned high hopes on the deal it signed in November with Turkey to cut refugee numbers in exchange for three billion euros ($3.2 billion) in aid and faster EU membership talks.