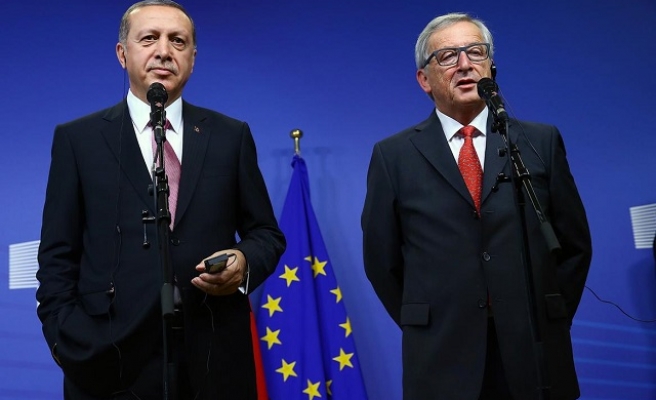 The EU is to publish later Tuesday a crisis plan with Turkey aimed at dealing with the flow of migrants into the bloc, a day after President Recep Tayyip Erdogan held talks in Brussels.

European Commission chief Jean-Claude Juncker said he had thrashed out details of the plan, which will be published at 1300 GMT, during his talks with Erdogan.

"It is clear that we need Turkey. The Commission will come to its aid," Juncker told the European Parliament in Strasbourg after hailing Ankara for having admitted 2.2 million refugees from the war in Syria.

"The European Union and Turkey must work together, develop an asylum policy and help the unlucky ones who come to us," Juncker said.

An EU source said Juncker and Erdogan "agreed on the principle of having a joint action plan on enhancing cooperation on migration" that would be ready for a new EU summit next week aimed at tackling the worst refugee crisis since World War II.

The pair discussed, for example, ways to make it easier for Turks to get European visas in return for better Turkish management of the borders with Europe, the source told AFP on condition of anonymity.

The source said Brussels will study providing additional financing to Turkey beyond the one billion euros ($1.1 billion) Juncker's commission has pledged and which EU leaders promised to match at an emergency summit last month.

"If they (the Turks) agree to build more reception centres (for refugees), we can look into helping to fund them," the EU source said.

Critics say Turkey appears to be pushing the idea because it fears gains by Kurdish rebels along the border would bolster Kurds seeking their own homeland in eastern Turkey.

Officials from the commission, the executive of the 28-nation bloc, will follow up on the plan with a visit to Turkey on Wednesday, the source said.

Migration commissioner Dimitris Avramopoulos will travel to Turkey next week.