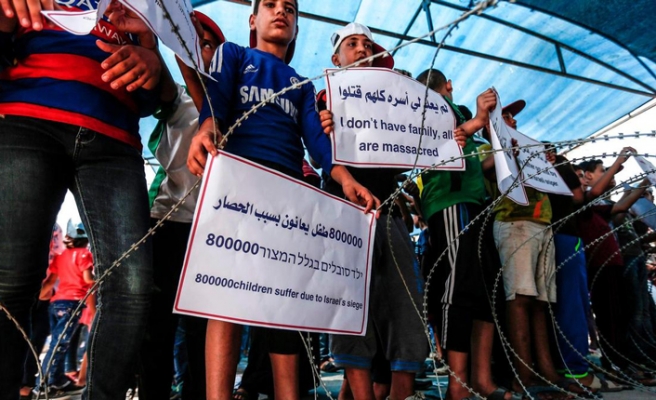 The European Union and the United Nations on Monday urged the immediate end of rising tensions surrounding the Gaza Strip.

In a written statement, Maja Kocijancic -- spokeswoman for EU foreign policy chief Federica Mogherini -- said that "the escalation of violence in and around Gaza during the last hours is very alarming".

Calling the firing of indiscriminate rockets and other actions such as targeting civilians "unacceptable", Kocijancic urged the immediate stop of all violent actions.

"The EU urges both parties to step back from the brink and avoid any further actions that would contribute to the escalation, put civilians’ lives at risk, and jeopardise recent efforts towards reducing tensions," she said.

UN Secretary-General Antonio Guterres also spoke about Gaza in an interview with France24 in Paris.

Guterres called it "an extremely worrying situation," stating that "the suffering of the people of Gaza is unimaginable".

The UN chief said that the tensions in Gaza should be defused as soon as possible, warning that otherwise it could turn into a "massive tragedy".

Israeli fighter jets on Monday evening struck positions across the blockaded Gaza Strip in response to rocket launches from Gaza into southern Israel.

Three Palestinians were martyred in the Israeli attacks, while nine were wounded, Gaza’s Health Ministry said.

Artillery units near the Gaza-Israel buffer zone have reportedly targeted concentrations of Palestinian activists in central Gaza, along with resistance positions in the town of Jabalia and the city of Deir al-Balah.

In a joint statement, Palestinian resistance factions announced that they had begun firing rockets into southern Israel in response to an Israeli military incursion into the southern Gaza Strip late last night.

On Monday evening, the army said it had recorded the launch of at least 200 rockets from Gaza, including 60 it claimed were intercepted by Israel’s Iron Dome missile defense system, while the others fell onto empty land.

At least 19 Israelis were wounded, with one -- reportedly a soldier -- in serious condition.

Late Sunday night, seven Palestinians were killed -- including a senior Hamas commander -- when an Israeli military force staged a ground incursion into the southern Gaza Strip.

One Israeli soldier was killed in the raid and another injured, according to the Israeli army.