European Commission chief outlines plans for binding quotas that would share out 120,000 refugees across EU from swamped border states 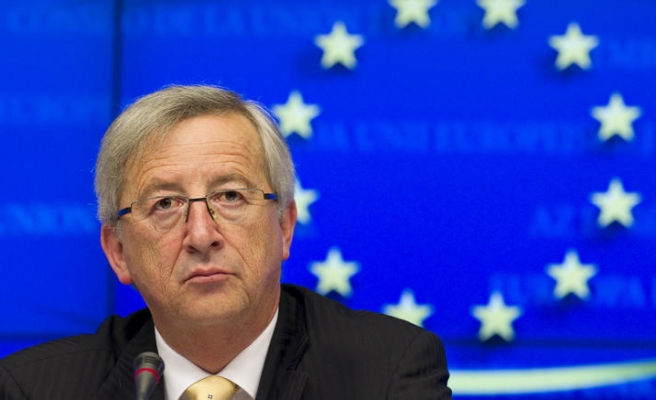 Juncker outlined plans for binding quotas that would share out 120,000 refugees across the bloc from swamped border states, as well as a more permanent system for a crisis that officials say will last for years.

Australia had earlier said it would take more people fleeing wars in Syria and Iraq, responding to calls from an increasingly strained Europe for the rest of the world to help shoulder the burden.

In his first EU State of the Union speech to the European Parliament, Juncker urged "bold, determined action", saying, "Now is not the time to take fright."

The migrants' plight has touched hearts around the world, spurred especially by pictures last week of three-year-old Syrian Aylan Kurdi, whose lifeless body washed up on a Turkish beach.

Germany -- which expects 800,000 asylum claims this year and has said it could take half a million refugees annually over several years -- said the plan "was an important first step", but warned against rigid ceilings.

"We need an open system to share out those with a right to asylum," Chancellor Angela Merkel said after talks with Swedish premier Stefan Lofven, whose country has also already welcomed thousands of migrants.

France has already agreed to take its 24,000 over two years and British Prime Minister David Cameron has said Britain can take 20,000 over five years.

But mandatory quotas have faced stiff opposition from states such as Hungary that are on the front line of Europe's largest migrant wave since World War II.

EU president Donald Tusk warned Monday of an "exodus" that would likely last "for many years".

Rights groups have criticised the EU response, which Amnesty International labelled "piecemeal and incoherent", and urged more support for border countries that are barely coping with the vast influx of people.

On the Greek holiday island of Lesbos, where around 20,000 refugees and migrants have been waiting in squalid conditions to travel to the mainland, a new processing centre was set up overnight to help with registrations.

Athens has warned the situation is "on the verge of explosion", while tensions are also rising across the Aegean Sea where around 10,000 more people are stuck on islands as they make their way to Western Europe.

"It was horrible the last three days... There are no rooms, no hotels, no bathrooms, no beds, no anything," said Hussam Hamzat, a 27-year-old engineer from Damascus who finally got his departure papers Tuesday after an overnight wait.

At the latest flashpoint of the crisis, the Hungarian-Serbian border, several hundred migrants broke through police lines at the main frontier crossing overnight, forcing police to use pepper spray to move a group off a main road.

The migrants emerged from corn fields before making their way over the border and joining a column of humanity on the way to Budapest, although most want to make it eventually to Germany.

"We don't want to live any longer in the camps in Hungary or elsewhere, the conditions are horrible. It's too cold and everything is dirty, and it smells bad," said a young man from Damascus.

'EVERY COUNTRY IN THE SPOTLIGHT'

In an illustration of the deep divisions in the EU's response to the crisis, Hungary vowed Tuesday to speed up construction of an anti-migrant fence on its 175-kilometre (110-mile) southern border aimed at stopping migrants.

Budapest has strengthened penalties for anyone found crossing its borders illegally after more than 165,000 migrants arrived this year, but the UNHCR's Europe director Vincent Cochotel warned the laws could "lead to chaos" when they are brought in next week.

More than 380,000 people have arrived in Europe by sea this year, new figures from the UN's refugee agency UNHCR showed Tuesday, including close to 260,000 in Greece and 121,000 in Italy.

Many are fleeing war and poverty in the Middle East, particularly war-torn Syria, as well as Africa and Asia in search of a better life in Europe, with most headed for top economy Germany.

The UN's special representative for migration and development, Peter Sutherland, called for a global asylum effort, proposing an international conference "where every country is held up to the spotlight."

Australian Prime Minister Tony Abbott bowed to pressure and said his country would take an additional 12,000 refugees from Syria and Iraq, adding that Canberra would also join US-led air strikes on the Islamic State group in Syria.

Venezuela has said it would accept 20,000 refugees, Brazilian President Dilma Rousseff declared migrants would be welcomed there with "open arms" and Chile's leader Michelle Bachelet also vowed to take "a large number".