EU warned of refugee buildup in Greece ahead of key summit

'Hundreds are arriving on a daily basis and Greece is expected to receive another 100,000 by the end of the month,' EU migration commissioner says 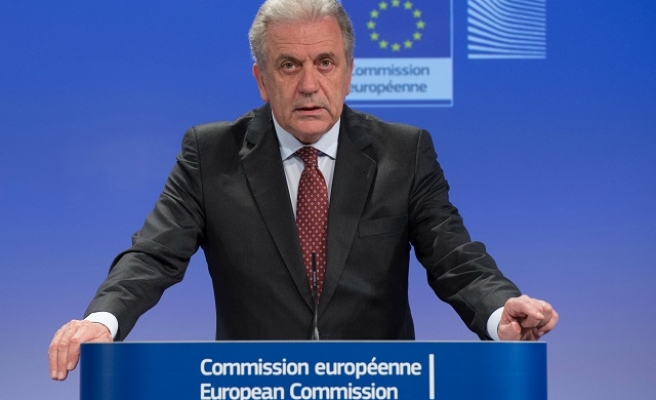 Greece is likely to receive another 100,000 refugees by the end of the month, Europe's migration commissioner warned on Saturday, two days ahead of an EU-Turkey summit seen as the only viable solution to the crisis.

As EU members continued to bicker, Dimitris Avramopoulos, in charge of migration at the powerful Brussels executive, pointed to upcoming measures, including an overhaul of asylum rules, to help ease tensions.

"Hundreds are arriving on a daily basis and Greece is expected to receive another 100,000 by the end of the month," Avramopoulos told a conference in Athens.

Greece lies at the heart of Europe's greatest migration crisis in six decades after a series of border restrictions on the refugee trail from Austria to Macedonia caused a bottleneck on its soil.

Over 30,000 refugees and refugees are now trapped in the country, desperate to head northwards, especially to Germany and Scandinavia.

"In a few weeks," the EU will announce a revision of its asylum regulations to ensure a "fairer distribution of the burden and the responsibility," Avramopoulous told the conference.

The huge influx of refugees has caused major divisions within the EU, although European President Donald Tusk on Friday struck an upbeat note about Monday's summit in Brussels, which will include Turkey.

European leaders are expected to use the summit to press Ankara to take back more economic migrants from Greece and reduce the flow of people across the Aegean Sea.

Finger-pointing continued within the 28-nation EU bloc on Saturday.

German Chancellor Angela Merkel -- a key player in the drama -- said Greece should have been quicker in preparing to host 50,000 people under an agreement with the European Union in October.

"Greece should have created 50,000 accommodation places for refugees by the end of 2015," Merkel told Bild newspaper in an interview to appear Sunday.

"This delay must be addressed as soon as possible as the Greek government must provide decent lodgings" to asylum claimants, she said.

Germany's neighbour, Austria, meanwhile, reiterated its call for Berlin to establish an annual quota of refugees.

Last year, 1.1 million refugees arrived in Germany under Merkel's liberal asylum policy -- a flood that other countries have said is just not sustainable.

"Germany, for its part, has to determine a figure for the number of refugees which can be accepted, which it is willing to go and pick up in the Syria and Turkey region," Austrian Chancellor Werner Faymann said in an interview in the daily Kurier.

"At the end of the day, Germany has to be clear about things, otherwise refugees will continue to head" there, Faymann said.

Around a third of refugee buildup in Greece is at the Idomeni crossing, on the country's norther border with non-EU member Macedonia.

"There are 13,000 people here and nearly 20,000 in this prefecture, over 60 percent of the country's entire refugee and refugee flow," Apostolos Tzitzikostas, regional governor of Greece's central Macedonia prefecture, told Skai television on Saturday.

"We can no longer shoulder this strain by ourselves."

Greece sent in the army in February to speed up the creation of open camps for refugees and refugees but has occasionally run into opposition from local authorities.

The charity Doctors Without Borders (MSF) on Saturday began erecting additional tents at Idomeni to shelter over 1,000 people who could not fit in the camp and have been sleeping in muddy fields and ditches, an AFP reporter said.

In past days, the mainly Syrian and Iraqi refugees have regularly held protests in front of the barbed-wire fence guarded by Macedonian riot police, demanding to be allowed through.

Hussam, a 25-year-old Syrian, said the refugees were hoping that Monday's EU-Turkey summit will provide a breakthrough.

"We are calm now because we are hoping for a positive outcome on Monday, that they will help us pass," Hussam said. "If there isn't one, I don't know what will happen."

According to Greek officials, Macedonia has allowed some 2,000 people through its borders in the last two weeks. The same number of people fleeing war and poverty arrive in Greece from neighbouring Turkey in two days.

Some 200 people were allowed through between Friday and Saturday, with Macedonian police calling into question registration documents handed to refugees by Greek police at the islands.

In many cases, the documents do not carry full dates of birth, only the year, while disputes over the correct colour of a police stamp can also hold up the process for hours.

Athens is building additional facilities to house the refugees, but many prefer to go to the border in the hope of eventually getting through, and are stuck there for days and weeks.

Greece has asked the EU for 480 million euros ($526 million) in emergency funds to help shelter 100,000 refugees. A senior UN migration official has warned that the numbers stuck in Greece will probably reach 70,000 in the coming weeks.