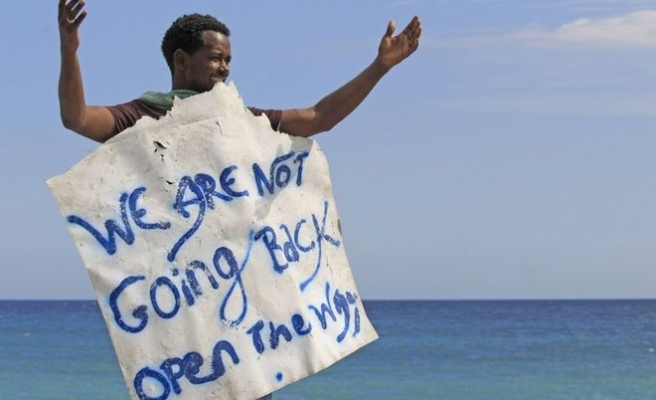 Huge traffic jams built up along the Austro-Hungarian border on Monday as police hunted for people smugglers, while divisions opened up across Europe over dealing with the influx of migrants and refugees.

Austria's tightening of security checks came just days after the discovery of 71 dead migrants, four of them children, in an abandoned lorry near the border.

Since the checks began late on Sunday, more than 200 migrants have been picked up and five people arrested on suspicion of smuggling.

Across the border, hundreds of people stuck in makeshift refugee camps in Budapest were allowed to board trains headed for Austria and Germany, an AFP correspondent at the scene said.

Police had previously prevented some 2,000 people from leaving the station because they had no legal papers, but on Monday, police were no longer present as the refugees, many from Syria, rushed to board trains.

Several hours later, up to 400 of them were stopped at the Austrian border and taken off a Munich-bound train and transferred to a regional train heading for Vienna, police said.

The sense of chaos has been reflected across Europe as the continent struggles to respond to the biggest movement of people since World War II, with more than 300,000 arriving this year.

Many are fleeing war, poverty and persecution in the Middle East and Africa, and at least 2,500 have died while trying to make the treacherous journey across the Mediterranean Sea.

Austria has called to axe EU funds to states refusing to take their share of migrants in the latest sign of deepening divisions over the crisis.

Home affairs ministers will on September 14 in Brussels in a bid to "strengthen the European response".

"If Europe fails on the question of refugees, if this close link with universal civil rights is broken, then it won't be the Europe we wished for," said German Chancellor Angela Merkel on Monday.

Her comments mirrored those of French Prime Minister Manuel Valls as he visited the crisis-hit French port of Calais.

"Too many countries are refusing to play their part. It goes against the European spirit and we can't accept it," he said.

Valls said by early 2016, France would build a new reception camp for migrants in Calais, with the help of five million euros from the European Commission.

Most migrants land in Italy or Greece, then try to head towards the wealthier countries of northern Europe.

"We are in a labyrinth, going from queue to queue, and here in Serbia, the police are shouting at us like we are animals," Samar, 40, from Damascus, told AFP as she waited with her two teenage boys for hours in the sun at a filthy camp in Presevo.

Transit countries in eastern Europe and the Balkans are struggling to cope.

Two weeks ago, Macedonia declared a state of emergency.

And the right-wing government in Hungary, which has seen 50,000 new arrivals this month, has been laying NATO-standard razor wire along its border with Serbia and is building a four-metre (13 feet) fence to be policed by border guards and sniffer dogs.

Criticised by French Foreign Minister Laurent Fabius as a breach of "Europe's common values", it has also proved ineffective, with police saying 3,080 migrants crossed on Saturday, the second-highest daily total.

A Palestinian-Syrian woman, travelling with her four-year-old daughter and other relatives, was unfazed.

"I just don't care who detains me now, I've already seen the worst," she told AFP in Belgrade.

"We were detained by the (Kurdish) People's Protection Units, the Islamic State group and Al-Nusra Front as we travelled westwards towards Turkey. It's a miracle we survived all that."

Hungary has arrested four Bulgarians and an Afghan in connection with last week's abandoned truck tragedy, but four of them have pleaded not guilty.

Inside the Hungarian-plated truck were the decomposing bodies of 59 men, eight women, a toddler and three young boys, all thought to be Syrians.

Police said they may have been dead for up to two days before the lorry was found with body fluids dripping leaking out of it.

A passer-by told Hungarian news portal Index.hu that he saw the driver running away from the back doors in panic before picked up and driven away in another car.

Three Syrian children, who were rescued with severe dehydration from another migrant-packed van, disappeared with their parents on Friday, with the families most likely heading to Germany, Austrian police said.

So far, the authorities have arrested 93 alleged people traffickers this year in Upper Austria state alone, but most still escape, officials said.