In their historic joint address to European Parliament, French and German leaders have called on Europe to jointly resolve the refugee and Syria crises 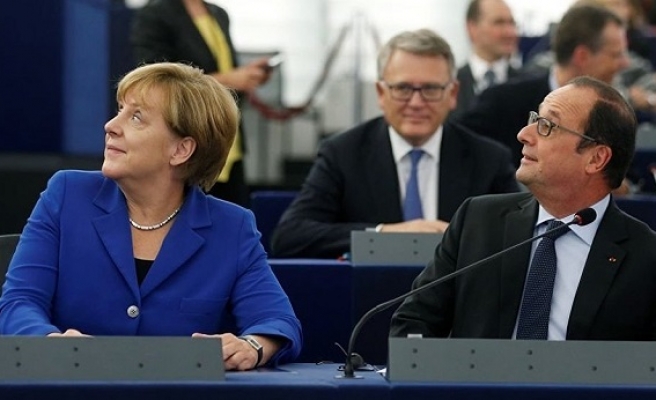 France and Germany have highlighted the need for European countries to act together for resolving the ongoing refugee crisis and the conflict in Syria.

French President Francois Hollande and German Chancellor Angela Merkel made the remarks about the two issues at a historic joint address to the European Parliament in Strasbourg on Wednesday, the first such event by leaders of the two countries since 1989, to mark the 25th anniversary of German reunification.

"Europe was slow to realize that the crisis in Middle East and Africa would have consequences for Europe itself," Hollande told the parliamentarians.

"We must provide Turkey with assistance and ensure refugees are able to work [and] feed their children," he said.

The French president added that the quota plan agreed between EU states to respond to the refugee crisis must be implemented "quickly".

Merkel called on EU states to act responsibly while tackling the refugee crisis. "The refugee crisis is a major challenge. We are talking about human beings. We need courage for the challenges that lay ahead," she said.

"We cannot shut ourselves off from the world and what happens in it. No one voluntarily leaves home," the German chancellor said.

"It is precisely now that we need more Europe. Germany and France stand ready...It is not possible to resolve the refugee crisis by countries acting alone. We need a new approach based on fairness and solidarity for relocating refugees," Merkel told the parliamentarians, before concluding:" It is a job for Europe, it is a job for the whole world".

She also criticized EU's Dublin Regulation that calls on asylum seekers to be processed in the first country they arrive. She said that the regulation had "not proven itself to be viable" to deal with the realities of the crisis and it was now "obsolete in practice".

Germany, which has become the most popular destination for refugees coming to Europe, expects a record 800,000 asylum applications this year, four times last year's total. France has vowed to host 24,000 refugees over the next two years as requested by the European Commission.

The two leaders also urged Europe to contribute in finding a solution to the Syrian conflict.

Hollande said that a failure to act in Syria risked stoking a "total war".

"What happens in Syria concerns Europe, what happens there will determine the balance of the whole region for a long time," he said.

"If we leave these religious clashes between Sunnis and Shias, they will grow. Don't think we will be sheltered, this will be a total war," Hollande warned, adding: "If we allow Syrian crisis to escalate, do not think we will be protected. Europe must do what it can".

Merkel said that "a decisive contribution by Europe for solution in Syria is required".

"We have to try and stop the flow of migrants and there is no going around addressing the root causes," she said.

EU is facing the biggest refugee influx since the World War II. More than 500,000 refugees entered the EU in the first eight months of the year, most from conflict zones such as Syria.