Tens of thousands of activists held rallies across Europe in February to protest against the law, which they said would curb their freedom and allow officials to spy on their online activities. 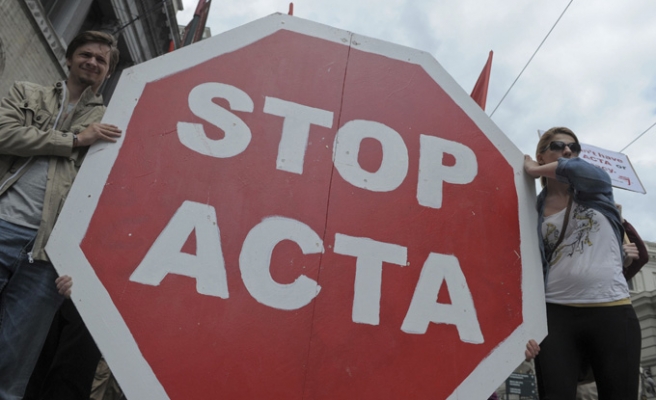 The European Parliament rejected a global agreement against copyright theft on Wednesday, handing a victory to protesters who say the legislation would punish people for sharing films and music online.

The vote marked the culmination of a two-year battle between legislators who supported the Anti-Counterfeiting Trade Agreement (ACTA) and its largely young, digitally savvy opponents.

Tens of thousands of activists held rallies across Europe in February to protest against the law, which they said would curb their freedom and allow officials to spy on their online activities. About 2.5 million signed a petition against ACTA.

European Parliament lawmakers voted against the agreement by 478 to 39 with 165 abstentions, meaning the proposed law will have to be renegotiated by the European Commission, the EU's executive.

ACTA took four years to negotiate and has already been signed b y several of the European Union's big trading partners, including the United States, Canada and Japan. Its rejection is likely to complicate free-trade talks, officials have said.

One of the aims of the agreement was to stem the growing tide of illegal downloads and streaming of illegal copies of films and music online. It also calls on signatories to seize fake goods and punish gangs making and selling them.

In rejecting ACTA, the European Parliament has not only raised doubts about the agreement's future - because to function well it will require global adherence - but also called into question a separate proposed EU law on enforcing copyright.

EU officials fear they will they will encounter similar resistance when they attempt to reform the outdated law, IPRED, later this year.

The existing copyright law was adopted in 2001, when slow Internet dial-up connections were not capable of the swift flow of file-sharing seen today.

"There are a lot of people who protested against ACTA who would be willing to protest against the EU's IPRED," Marietje Schaake, a Dutch member of the European Parliament said.

"We don't want reform of copyright to be stifled by a confrontational atmosphere between the public and the Commission."

EU Trade Commissioner Karel de Gucht said ahead of the vote, referring to concerns about future legislation: "A vote against ACTA will be a setback for the protection of our intellectual property rights around the world."

The cost of web piracy to the European Union is difficult to estimate, because compiling such figures would require spying on people's online habits. But record label lobbyists say a steady decline in revenues over the last decade is enough evidence.

Business groups said the ACTA rejection meant the European Union would be weakened in free trade negotiations with the United States, Canada and emerging markets that are relative newcomers to intellectual property.

"When the EU talks to China about intellectual property rights, they (China) will refer to the parliament's rejection (of ACTA)," said Ilias Konteas, a senior adviser at BusinessEurope, an EU lobby group representing 20 million firms in 35 countries.

"I am afraid the unintended consequences have not been considered by members of the European Parliament."

The European Commission admits it must learn from the backlash against ACTA before IPRED is published in September. The main problem with both laws can be boiled down to two words: commercial scale.

Since negotiations began behind closed doors in 2008, ACTA's critics in the European Parliament said the agreement needed to distinguish between web users who downloaded illegal files for their own entertainment and those who sought to make a living from it. But that never happened.

In a paper on the proposals to update EU copyright law, obtained by Reuters, the Commission said the reform must define commercial scale "to make sure that professional counterfeiters rather than individual consumers are targeted".

In February, the European Commission referred ACTA to Europe's highest court, the Court of Justice, for a ruling over whether it breached freedom of speech. A decision could take up to a year.