European Parliament has adopted a resolution that recognizes the 1915 events affecting Armenians as "genocide." 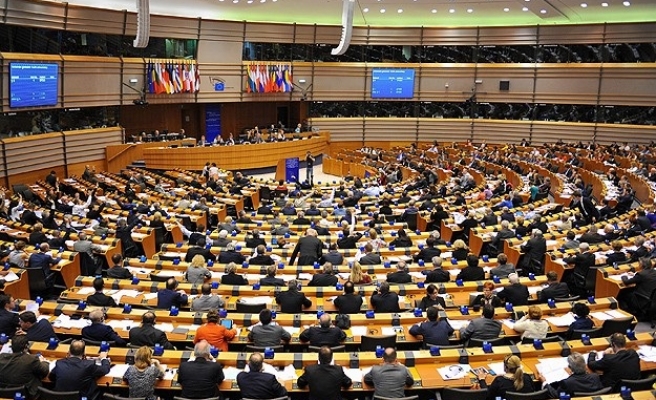 The European Parliament has adopted a resolution that recognizes the 1915 events affecting Armenians as "genocide."

The European Parliament first recognized the 1915 events as "genocide" in a 1987 resolution, which the parliament recalled in a vote Wednesday - the centenary of the 1915 events.

The resolution states: "The importance of keeping alive the memories of the past are paramount, since there can be no reconciliation without truth and remembrance."

It "urges Turkey and Armenia to proceed to a normalization of their relations by ratifying and implementing, without preconditions, the protocols on the establishment of diplomatic relations.”

Also, the resolution said that normalization of relations could be done "by opening the border and by actively improving their relations, with particular reference to cross-border cooperation and economic integration."

Turkey has repeatedly rejected the EU's definition of the event and has pointed out that Armenians died during a relocation process in 1915 during World War I when a portion of the Armenian population living in the Ottoman Empire sided with the invading Russians and revolted against the empire.

The European Commission, the executive body of the 28-nation bloc, and the European Council refused to call the 1915 events "genocide," indicating a split on the issue within the bodies of the European Union.

Ernest Maragall, member of the European Parliament for the Greens, said ahead of the vote Wednesday that one must distinguish between the Ottoman Empire and current Turkish state.

"The Turkish people today are taking on thousands of refugees and want to live in peaceful future," Maragall said at the European Parliament in Brussels.

Wednesday's vote comes a day after the European Union urged Turkey and Armenia to normalize their relations following a spat prompted by Pope Francis’ remarks over the 1915 events.

They said the pressure to recognize, what has been termed a so-called “Armenian genocide” did not help so far to bring reconciliation between Turks and Armenians. “On the contrary, external interventions have fuelled reactionary nationalism and hindered dialogue," the statement added.

"We should, therefore, encourage the Turkish government to continue its process of reconciliation allowing for a frank and open discussion of past events."

The Friends of Turkey statement added: "EU accession negotiations have undoubtedly contributed to more honest and open discussions of historical events in Turkey.

"In this regard, the accession process remains the most effective tool in influencing Turkey's democratization course."

Maja Kocijancic, European Commission spokeswoman, said Tuesday: "In the context of Turkey’s status as a (EU) candidate country we are following the issue of reconciliation and normalization of relations with Turkey."

Turkey and Armenia disagree on what happened during the events between 1915 and 1923, with Armenia saying that 1.5 million people were deliberately killed and Turkey saying the deaths were a result of relocations and civil strife.

Pope Francis said Sunday that “the first ‘genocide’ of the 20th century struck Armenians," a statement which triggered criticism from Turkey and led to Ankara recalling its ambassador in the Vatican and also summoning Vatican's envoy in the Turkish capital.

Armenia has demanded an apology and compensation, while Turkey has officially refuted Armenian allegations over the incidents saying that, although Armenians died during the relocations, many Turks also lost their lives in attacks carried out by Armenian gangs in Anatolia.