Europe's shame, nameless dead with no one to claim them

As if the trauma and tragedy of abandoning their war torn homeland isn't enough, many refugees who die in their attempt to reach Europe are buried without any identification in Lesbos. 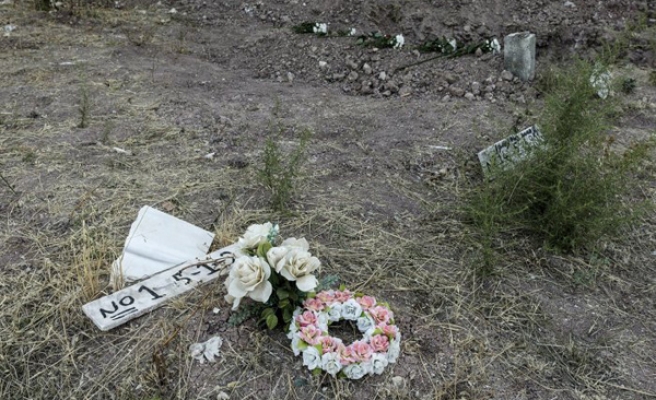 Shrouded in white, the little girl lies on the ground in the paupers' section of Lesbos cemetery. Strangers attend her burial, and she will forever rest next to an unknown woman who died with her.

"Her mother may be alive in Turkey but we have not been able to find a family contact," says Effi Latsoudi, a member of a volunteer group helping migrants on Lesbos, the Greek island that is a gateway into Europe for thousands of migrants and refugees.

All that is known of the little girl is that she was seven -- according to the coroner -- and that she died on September 20 trying to cross the Aegean Sea in search of a better future.

Among the group she was apparently travelling with, the Turkish coastguard rescued 20 people and another 24 are believed to be missing.

A bulldozer digs three new graves for the girl, two women and an unidentified man. For want of space, the girl will be buried with one of the women.

Assuming all four are Muslim, the graves are dug facing Mecca.

An Iraqi refugee is present to say a prayer for the dead, assisted by Mustafa, an Egyptian interpreter working for rights group Pro Asyl.

Two women from the Israel-based humanitarian agency IsraAID -- an Israeli and a Palestinian -- are also present.

The volunteers all help to lower the bodies into the ground.

At the end of the prayer, olive branches are placed on the graves.

'Europe should be ashamed'

"Europe should be ashamed of forcing these people to risk their lives," says one of the volunteers.

The continent is grappling with its biggest migration challenge since World War II, with the main surge coming from civil war-torn Syria.

"Many of these people have relatives looking for them and they have no support to find them," says Latsoudi.

Another five-year-old girl from Syria died a day earlier. She was identified and her family, who are refugees in Germany, will claim her body for burial.

A Christian family from Syria -- a couple with two children and a grandmother -- lie beneath headstones adorned with flowers.

They died on March 18, 2014, hoping to reach family in Sweden. Their relatives subsequently travelled to Lesbos for the funeral.

But another man from Syria was only identified a year after his death by his wife.

And older graves belonging to Kurds, Iraqis, Afghans who died in past migrant waves are marked only with numbers.

Other more recent victims are "identified" by their date of death.

The cemetery of Agios Panteleimonas on the island capital of Mytilene has been the final resting place of migrants who perish in the storm-hit Aegean for years.

Now it is running out of space.

Since the beginning of the year, 11 graves have been added to more than 60 already dug in this section of the cemetery.

And 10 more people await to be buried.

Many more will drown

"This used to be a mass grave for victims of the Second World War. Only refugees and poor Greeks are buried here now," Latsoudi says.

The local group she represents, Horio Oloi Mazi ('the village of all together') was founded in 2012 after 22 migrants died near the island.

It aims to bring "a little respect and humanity" to the dead and to help their relatives seek them out, she says.

More than half a million people have reached Europe via the Mediterranean this year -- including more than 310,000 who have landed in Greece, figures from the UN refugee agency show.

But according to Greek authorities, more than 100 migrants have died or gone missing in the last two weeks alone in at least seven boat accidents.

"Now that the northern winds have picked up there will be even more drownings," says Christos Mavrakidis, the man responsible for the cemetery.

Earlier in the day, another woman and child died when the bottom of the inflatable dinghy they were sailing in fell apart.

Mavrakidis says the bodies should be exhumed after three years -- as is done with Greeks who can't afford to continue paying for a grave -- to create space.