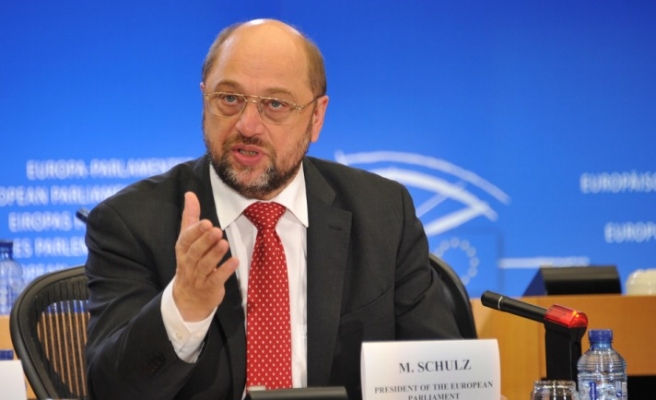 It has to be understood that a solution to the refugee crisis is not possible without Turkey, European Parliament President Martin Schulz said Tuesday.

Addressing the Greek Cypriot parliament Tuesday, Schulz said a common understanding is necessary to overcome fears about the refugee problem. He urged all stakeholders to listen to each other before hurling accusations.

"Although only a quarter of a century has passed since the fall of the Berlin Wall, new walls and fences in Europe have been established because of the refugee movements," he added.

Reiterating his support for Greek Cypriot region’s EU membership, Schulz said: "Without Cyprus, Europe will not be whole and this integrity can be provided only when the whole of Cyprus becomes a member of the European Union."

Schulz said success of the negotiations in Cyprus requires both parties to take the right steps. "If reunification is accomplished, all Cypriots will benefit its political, scientific and cultural outcomes," he added.

He also said the refugee crisis and the Turkish-EU negotiating processes were different issues and should not be mixed.

Schulz also said negotiations in Cyprus had been at a standstill for a long time and until a few years ago, no one could have thought that such meetings would be so productive like they were now.

"So, I would like to express my deepest regards to Mr. Anastasiadis and Mr. Akinci. Negotiations were reinstated thanks to their courage. The talks are progressing well under their leadership.

“We can see strong signals of constructive spirit and the will of cooperation in the letter of Anastasiades to the Dutch EU presidency, which kindly requests Turkish language to be used as the official EU language," he said.

"The reunification of Cyprus has become a realistic possibility, which also means a historical chance can be caught, because Cyprus is a single territory and Cypriots are one nation," he added.