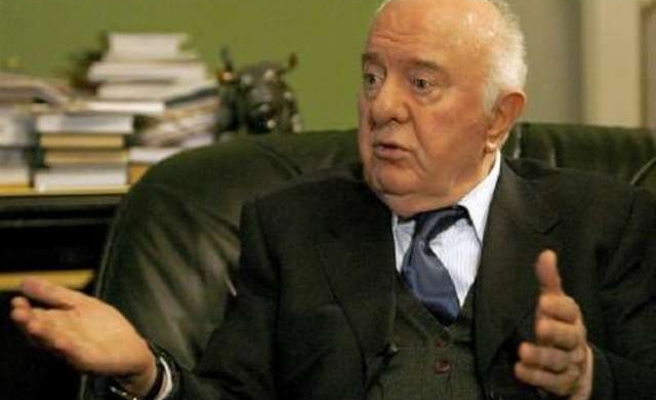 Eduard Shevardnadze, who as Soviet Foreign Minister helped bring down the Berlin Wall and end the Cold War, died on Monday after a long illness.

Shevardnadze, who was 86, went on to lead his native Georgia in the stormy early years after independence before being ousted in street protests.

Soviet leader Mikhail Gorbachev, who picked Shevardnadze as a break from the Soviet Union's old guard of apparatchiks, expressed sorrow over the passing of a "friend".

He described Shevardnadze, whose shock of white hair and wily diplomacy earned him the nickname "the Silver Fox", as an "extraordinary, talented person" who had done much to broker Germany's peaceful reunification and end the nuclear arms race.

"He was always quick to find a way of connecting with different people - with youngsters and the older generation. He had a bright character, a Georgian temperament," he said, referring to Shevardnadze's passionate nature.

One of those who was wooed by his charm was U.S. Secretary of State James Baker, or 'Jim' as he called him - a friendship that would help to shape the post-Cold War era.

"Shevardnadze will have an honoured place in history because he and Mikhail Gorbachev refused to support the use of force to keep the Soviet empire together," Baker said in a statement.

"He was an elegant and soft-spoken gentleman ... He was my friend with whom I had a special relationship," he said.

In Moscow, Shevardnadze's role in the Soviet Union's demise won him as many enemies and a checkered legacy.

"Of course he is a historic figure, but he belongs to that set of people who will go down in history as the destroyers of the Soviet Union, pandering to Western efforts to do so," the deputy head of Russia's Communist Party, Ivan Melnikov, said in a statement.

Russian President Vladimir Putin - who has described the Soviet disintegration as a greatest geopolitical catastrophe of the 20th century - remained neutral, offering his condolences to his "family, as well as the Georgian people".

Loved by some but hated by others in his native Georgia after bringing stability but failing to tackle widespread corruption, Shevardnadze rarely ventured out of his hill-top residence during his last years.

Shevardnadze's assistant, Marina Davitashvili, told Reuters he had died after a long illness at midday local time. The funeral will take place on Sunday and he will be buried next to his wife in the courtyard of his residence, she said.

As Soviet foreign minister, he oversaw a thaw in ties with the West and was one of the intellectual fathers of "perestroika" (restructuring) - the reform policy which Gorbachev said was conceived during a stroll along the shores of the Black Sea with his Georgian comrade.

In the post-Soviet landscape, Shevardnadze returned to Georgia to become president and brought some stability to the republic after a period of anarchy, when protesters toting Kalashnikovs prowled the streets.

He was toppled in the country's 2003 Rose Revolution, led by Mikheil Saakashvili, unceremoniously bundled out of parliament by his minders when it was stormed by protesters.

"I see that all this cannot simply go on. If I was forced tomorrow to use my authority it would lead to a lot of bloodshed," he said when he stepped down in November of that year. "I have never betrayed my country and so it is better that the president resigns."

A top Russian diplomat, Grigory Karasin, remembered him for keeping warm relations with Moscow as president of Georgia, contrasting that with his successor Saakashvili under whose rule Russia fought a war with Georgia in 2008.

In a nod to the "Silver Fox's" controversial legacy, Saakashvili said defining his mark on history was a struggle for the historians.

"Historians will have to work for a long time to assess his role," he wrote on his Facebook page.