Far-right leader to run for president in Ukraine

Yarosh's ultra-nationalist views make him a rank outsider in the May 25 election, but his remarks signalled a growing split with other leaders of the protest movement 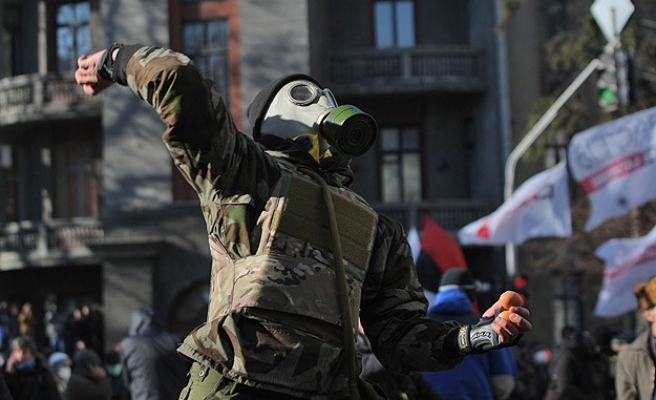 Ukrainian far-right leader Dmytro Yarosh said on Saturday he would run for president and launched a scathing attack on the new government, two weeks after he helped bring it to power through street protests.

Yarosh's ultra-nationalist views make him a rank outsider in the May 25 election, but his remarks signalled a growing split with other leaders of the protest movement that toppled Moscow-backed Viktor Yanukovich as president on Feb 22.

The outspoken leader of the Right Sector paramilitary movement, which wears black combat gear and ski masks, announced his presidential campaign despite being wanted by Russia on charges of incitement to terrorism.

"I am running for president," Yarosh told a news conference, confirming a decision by Right Sector's leadership body.

He then went on to criticise the leaders in the new government who were united with him in support of the protests against Yanukovich, in which Right Sector had increasingly set the agenda this year.

"For now we see a lack of professionalism, government appointments are increasingly surprising and there is a gradual loss of public confidence," Yarosh said.

Yarosh was given the role of deputy secretary of the Security and Defence Council, the country's top security body, under the government of Prime Minister Arseny Yatseniuk that took shape after Yanukovich's overthrow.

But he complained the government had not released details about how at least 95 people were killed in clashes with police or by snipers during the protests, saying it was surprising that none of "the criminals who killed our heroes" had not convicted.

"The government must wipe out corruption, above all in the law enforcement agencies and judicial bodies. The government has to start systemic reforms," he said. "Only deeds, not words, will turn Ukraine into a state where people want to live and where separatists are thrown out of every town."

Yarosh, 42 and fiercely anti-Russian, plans to turn Right Sector into a political party. He says the Communist Party and Yanukovich's Party of Regions, which was dominant during the former president's four-year rule, should be banned.

Moscow has charged him with incitement to terrorism for allegedly suggesting a Chechen warlord should attack Russia after Russian forces took control of Ukraine's Crimea region.

"Yarosh has no chance of winning. The most he could get is about 3 percent of votes," said political analyst Volodymyr Fesenko of the Penta think tank, describing his bid as a practice run for the next parliamentary election.

Drawing comparisons with the Orange Revolution that kept Yanukovich out of power after what was widely seen as a fixed election a decade ago, he said: "The main problem is that there is again a split among the leaders of the opposition camp, as in 2004-2005."