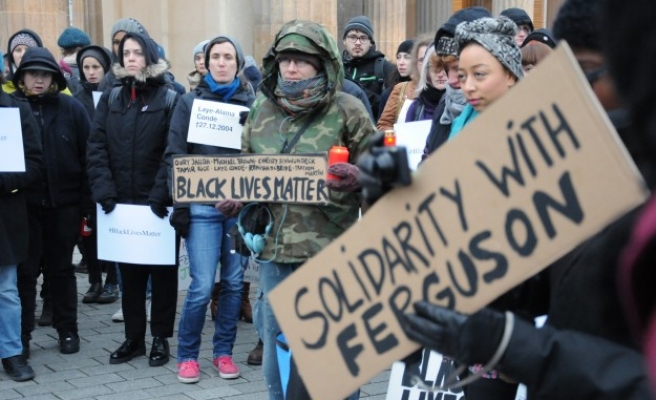 More than 100 people gathered on Saturday in front of Berlin's historical Brandenburg Gate to protest U.S grand jury's decision to not charge a white police officer who shot and killed a black teenager in August.

Michael Brown, a black 18-year-old, was shot six times by police officer Darren Wilson on Aug. 9, after he was allegedly pulled over for not walking on the sidewalk in the St. Louis suburb of Ferguson.

The Ferguson protesters of Berlin held the banners with slogans "black lives matter," "solidarity with Ferguson" and "Ferguson is everywhere" in addition to making statements on the incident.

The protest held by the “Initiative of Black People in Germany" lasted around an hour.

Reminding that a 12-year-old boy in Ohio holding a fake gun was shot dead by police last week in Cleveland, a member of the board of the initiative, Tahir Della, said that Brown was not the only man who fell victim to police violence.

Della also pointed to allegations of racist police violence in Germany by referring to Sierra Leonean asylum seeker Oury Jalloh who died in a fire in a prison cell 10 years ago.

"Oury's case has not been clarified for 10 years," said Della.

According to Human Rights Watch’s 2014 World Report, the U.S. has the largest imprisoned population in the world with 2.2 million people in adult prisons as of the end of 2011.