The heavy fighting is in spite of a 12-point peace blueprint mapped out in Minsk in early September which called for a ceasefire in the nine-month conflict in which more than 4,800 people have been killed 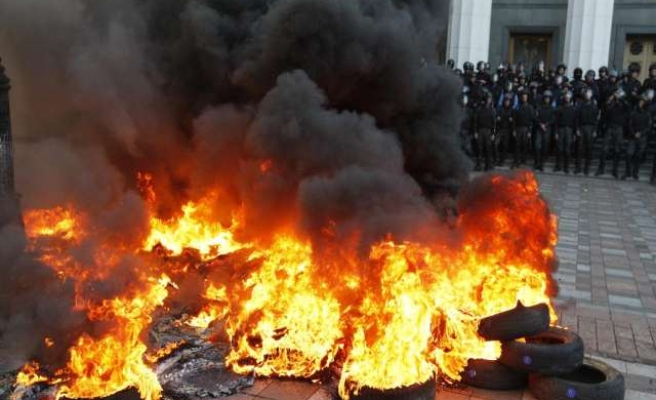 Fighting raged on Saturday at the main airport of Ukraine's city of Donetsk as separatists resumed attempts to break the tenuous grip of government forces on the complex and Kiev's military said three more Ukrainian soldiers had been killed.

With attempts to restart peace talks stalled, pro-Russian rebels have stepped up shelling attacks to break the resistance of government troops dug in at the airport, itself a wrecked hulk battered by months of war.

Though its runways are cratered and it has long ceased to function, the airport has symbolic value for both sides and has become the main flashpoint in the fighting as prospects for fresh peace talks have dimmed.

A planned meeting of representatives from Ukraine, Russia and the Organisation for Security and Cooperation in Europe and separatist leaders on the Ukraine crisis failed to materialise in the Belarussian capital Minsk on Friday.

A meeting of the so-called 'contact group' is seen as vital for getting the warring parties to observe a real ceasefire.

"In the past 24 hours three Ukrainian service personnel have been killed and 18 wounded. Yesterday evening we succeeded in evacuating the wounded from the airport," military spokesman Andriy Lysenko said.

Separatists were concentrating their fire on Saturday on the airport's new terminal and its weather station.

"Our forces are repelling the attacks of the terrorists. The fighting is heavy. Firing is going on all the time. The situation remains under control but the adversary is not letting up in its attacks to seize this strategic target," Lysenko said.

The heavy fighting is in spite of a 12-point peace blueprint mapped out in Minsk in early September which called for a ceasefire in the nine-month conflict in which more than 4,800 people have been killed, according to World Health Organisation.

Lysenko accused Russia of maintaining a threatening military presence near the border with Ukraine which he said included all types of powerful weapons including Smerch and Uragan rocket launchers.