Fighting rages between army and separatists in east Ukraine

The fighting in Slaviansk followed a day-long fire-fight on Monday in Luhansk, a town further east on the border with Russia, after an attack by separatists on a border guard camp. 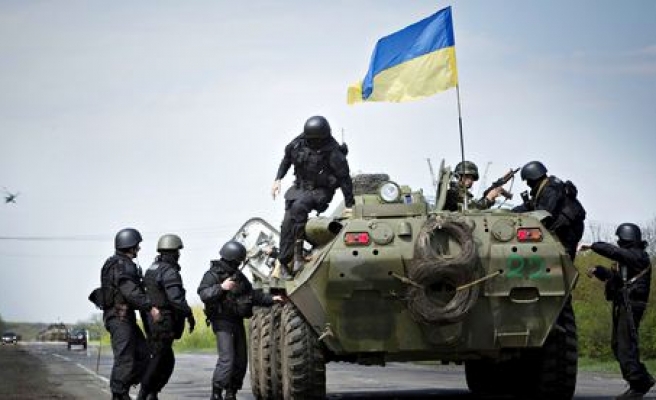 Fighting raged in eastern Ukraine for the second straight day on Tuesday as the army rolled out an offensive against pro-Russia separatists holding the city of Slaviansk, with dead and wounded on both sides, the Ukrainian government said.

Rebels in the town, a fiercely separatist stronghold where a military helicopter was shot down last week killing 14 servicemen, said they had brought down a Su-25 attack aircraft and a helicopter, but this was denied by Ukrainian authorities.

Twelve hours after Kiev's forces launched an overnight military operation in and around Slaviansk, Vladyslav Seleznyov, a spokesman for the Ukrainians, said: "Today we have had two killed and 42 wounded."

He put the number of dead and wounded on the separatist side at about 300, a figure that could not be independently verified.

"Fighting is continuing", he told Reuters on Tuesday evening.

Many of the town's women and children have left in recent days as the fighting got worse. One woman described how artillery fire began at dawn.

"I didn't know what that was before but I do now. We counted the number of fires and impacts," Daria, 27, a resident who said she was trying to leave with her daughter, said by telephone.

"War planes were flying over head ... We stayed in the basement as much as we could."

President-elect Petro Poroshenko called for a resumption of military operations by government forces to quell rebellions by pro-Russian militia across the Russian-speaking east after scoring a resounding election victory on May 25.

The Kiev government says the fighting is fomented by Moscow, which opposes its pro-Western course. Kiev also accuses Russia of letting volunteer fighters cross into Ukraine to fight alongside the rebels. Moscow denies this and is urging Ukraine to end military operations and open dialogue with the separatists.

Ukraine announced on Tuesday that a total of 181 people, including 59 servicemen, had been killed "by terrorist activity" since hostilities broke out in April.

Since government forces resumed their push against the rebels, there have been clashes in an around the main industrial hub of Donetsk and near the border town of Luhansk with loss of life on both sides.

But it is unclear whether the Ukrainian military, backed up by attack aircraft, is making real progress against the rebels, who are occupying strategic points in densely populated cities.

With violence continuing in Ukraine's east and tension high between Ukraine and Russia, the crisis is certain to dominate diplomatic exchanges when the newly-elected Poroshenko meets world leaders this week ahead of his inauguration next Saturday.

He is expected to meet U.S. President Barack Obama and other European leaders in Warsaw on Wednesday and will see Russia's Vladimir Putin at World War Two D-day celebrations in France on Friday, though no formal talks are planned.

The fighting in Slaviansk followed a day-long fire-fight on Monday in Luhansk, a town further to the east on the border with Russia, after an attack by separatists on a border guard camp.

At least two people were killed in the city centre of Luhansk, which like Slaviansk is under separatist control, by a blast which rebels said came from a Ukrainian air strike but which the Ukrainians said was caused by a misfire of a heat-seeking missile by the rebels.

"At the present time the active phase of the 'anti-terrorist operation' is going on near Slaviansk. The (separatist) fighters are being blocked. If they refuse to lay down their arms they will be destroyed," said Seleznyov, a spokesman for the military operation.

"Our job is to establish peace in the region and this we will do," he said.

"Information that Ukrainian planes and helicopters have been shot down are not true. Yesterday one of the helicopters received holes from small arms fire," he said.