Fighting rages on along Ukraine-Russia border

Ukrainian President Petro Poroshenko prepared for a round of high diplomacy to sell a peace plan to allies and adversaries alike in a bid to end the rebel insurgency that threatens the unity of the country. 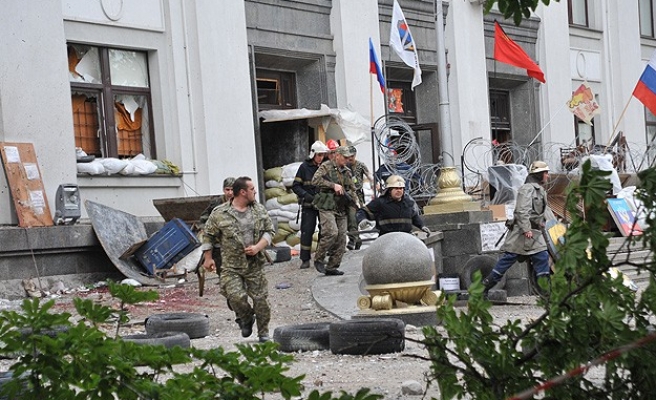 Ukraine's defence chief said on Friday government forces had regained control of the border with Russia and could stop supplies being sent to arm pro-Russian separatists, but fighting raged for a second day.

A spokesman for government forces said about 300 separatists had been killed in fighting on Thursday in an eastern area about 100 km (60 miles) from the border where fighting continued on Friday. Ukrainian forces had lost seven servicemen.

The rebel casualties could not be verified independently.

Ukrainian President Petro Poroshenko meanwhile prepared for a round of high diplomacy to sell a peace plan to allies and adversaries alike in a bid to end the rebel insurgency that threatens the unity of the country.

The biggest challenge for the newly installed Poroshenko will be to win real support from Russian President Vladimir Putin for his plan, with relations at rock bottom amid Ukrainian accusations that Moscow fomented the unrest.

Moscow denies orchestrating the unrest and supporting the rebels. It has urged Ukraine to end "punitive" action against the separatists and engage in dialogue with them.

Poroshenko's 14-point peace plan would start with a unilateral ceasefire by Ukrainian forces and offer a safety corridor out to Russia for rebels and volunteer Russian fighters on condition they lay down their arms.

The plan would offer freedom from prosecution for separatists who put down their arms and had not committed "serious crimes" and require all hostages to be freed.

It calls for "decentralisation" of powers and full Russian-language rights to address the grievances of people in the east.

Ukraine says fighters from Russia and supplies of guns and other military equipment have been pouring into the country to support the separatists, who rose up against Kiev's new authorities after the overthrow of the Moscow-backed Viktor Yanukovich in February.

Relations with Russia have deteriorated sharply since the ousting of Yanukovich, Russia's subsequent annexation of Crimea and the outbreak of separatism in Ukraine's Russian-speaking east.

But the pro-Western Poroshenko, installed in office on June 7, is under pressure all the same to secure support from Russia, as well as his backers in the West, for his plan.

On Thursday Poroshenko openly asked Russian President Vladimir Putin for his support when he outlined the plan in a telephone conversation, his website said.

His new foreign minister is due to present the blueprint on Monday to European Union foreign ministers in Luxembourg. Their support takes on added value given the signing of a political association agreement between the two sides on June 27.

Despite continued fighting, acting defence minister Mykhailo Koval told parliament on Friday that Ukrainian forces had restored control of the border and could now block military supplies being ferried to the rebels.

"Our forces have completed the encirclement of the problem region and restored the state border of Ukraine. Last week we fully closed off the possibility of any military equipment being brought in from the Russian Federation," Koval declared.

But many in the political establishment challenged this.

"If the border was under the control of our troops, we would have been the first to give this information, and it would have indeed been a step on the way to victory and transition to the clear plan which the President has declared - but there is no such (control) yet," said Volodymyr Chepovoy, a senior official of the National Security and Defence Council.

There were no clear details on the flow of battle on Friday east of Krasny Liman, a town controlled by government forces about 100 km (60 miles) from the border with Russia.

Seleznyov said on his Facebook page heavy weapons seized from the separatists on Thursday included an armoured personnel carrier, a truck with a high-calibre machinegun mounted on it, a shoulder-launched missile, grenade launchers and small arms.

At the border crossing point of Izvarino on Friday there was a two-kilometre tailback of cars, buses and minivans of people trying to cross into Russia to escape the fighting. Many vehicles were packed with bags and personal belongings, children's toys, water and food.

"We dropped everything, our house and property. Packed whatever we could carry and now we're ggoing to Moscow and further on. Ukraine has gone nuts. I'm hoping to return but I don't think it will work," said Natalya Bryalkova, 45, from a small town near Luhansk which was the scene of heavy fighting this week.

Lena, 37, who was with her baby daughter and husband, said: "We've been here for 30 hours. I haven't been able to wash my baby ... we've been sleeping in the car. This is a nighmare. We ran out of food but locals brought us enough to eat."