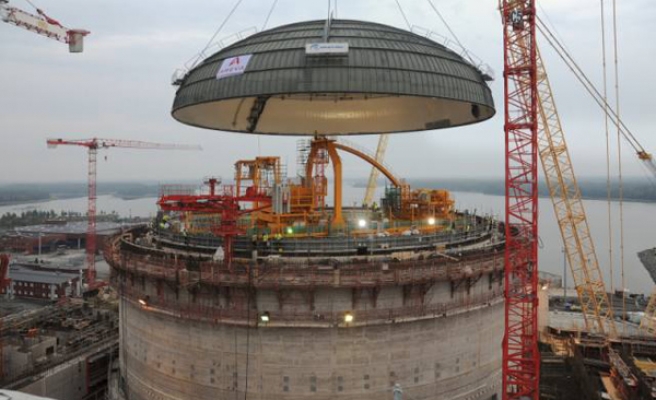 Turkey and Finland signed a Memorandum of Understanding on Tuesday to hold two technical experience-sharing meetings on regulations for new nuclear reactors in preparation for Turkey's nuclear projects.

The MoU between Turkish Atomic Energy Authority and the Radiation and Nuclear Safety Authority of Finland STUK was agreed during Finnish President Sauli Niinisto's visit with Turkish President Recep Tayyip Erdogan in Ankara.

Finland is also interested in working with the Turkish Atomic Energy Authority (TAEK) to help establish safety regulations, regulatory processes on the oversight and inspections of the construction and operation of both the Akkuyu power plant in the southern province of Mersin and Turkey's planned second plant at Sinop in the western coast of Turkey's Black sea region.

Additionally the body is interested in training inspectors to control the safety of the plants, director general of Radiation and Nuclear Safety Authority of Finland (STUK) said Friday.

The construction of Finland's Fennovoima plant and of the Akkuyu project coincide in their timing. Director general Petteri Tiippana explained to Anadolu Agency that as a result a very practical and unique opportunity arises to cooperate between TAEK and STUK on the safety assessment of the four Russian VVER-1200 (AES-2006) type reactors which will be used in Akkuyu.

Last December, the Finnish government gave its approval to the Finnish Fennovoima energy consortium to construct the Hanhikivi nuclear power plant in Pyhajoki in northwest Finland.

The shares of Fennovoima are divided between Finland’s energy company Voimaosakeyhtio SF with a 66 percent share, while the remaining 34 percent are owned by RAOS Voima Oy -- a subsidiary of Rosatom - Russia's state atomic energy authority - which will also build and operate Turkey's Akkuyu.

Rosatom will also supply the reactors for the Fennovoima's Hanhikivi nuclear power plant, according to sources from Finnish Ministry of Employment and the Economy.

The deal between TAEK and STUK includes two technical meetings to share regulatory experience on new reactors' licensing and construction. However, STUK will not have overall responsibility for the safety of the plants. This duty is assigned to TAEK in accordance with international agreements which stipulate that nuclear and radiation safety cannot be delegated outside national organizations.

"STUK is the Radiation and Nuclear Safety Authority in Finland and cannot operate as a regulator in any other country except Finland," Tiippana said, and added, "we would be happy to consult with Turkish Atomic Energy Authority in other ways as well."

The Russian state atomic energy corporation Rosatom will build and operate the plant, which will have a life cycle of 60 years and will cost about $20 billion. Construction will begin in 2016.

The project is expected to produce about 35 billion kilowatt-hours per year, and the planned four reactors of the plant are scheduled to become fully operational in 2023 -- the 100-year anniversary of the founding of the Turkish Republic.