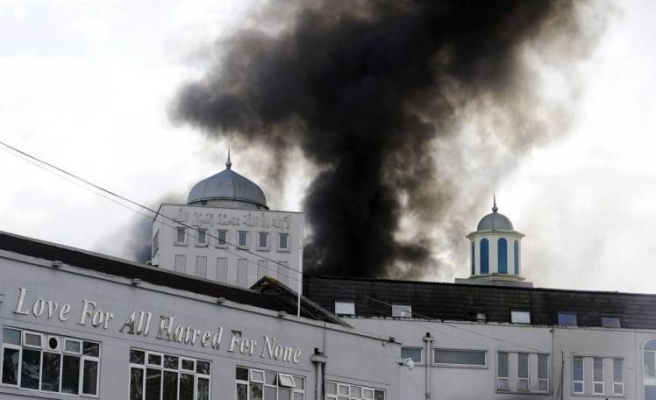 At least 10 fire engines and 70 firefighters were attending to a fire that broke out in a place of worship for the Ahmadiyya community in south London’s Morden district Saturday, the London Fire Brigade said.

Around half of Baitul Futuh religious complex’s ground floor, part of the first floor and a section of roof were on fire, according to the London Fire Brigade.

Firefighters were still tackling the blaze at 4 p.m., local time (1500GMT), four hours after the fire brigade was alerted.

Philip Morton, fire station manager, who was at the scene, said that this was a large fire and his crews were working hard to minimize the spread of fire to other parts of the complex.

“We are working closely with the local community to ensure our damage control operations take full regard of the religious significance of the building's contents,” Morton said.

Chris Hawkswell, an emergency planning officer at the London Ambulance Service, said that a man had been taken to a local hospital “as a priority suffering with smoke inhalation”.

There were no other reports of injuries.

According to the Baitul Futuh’s official website, the religious complex provides the Ahmadiyya community with a central focal point for meetings, social and religious events apart from it being a place of worship. The community acquired the site in 1996, which was previously the "Express Dairies" and the foundation stone of the complex was laid on October 19, 1999.

It was completed in 2003 with donations from the local Ahmaddiya community and has a capacity for 10,000 worshippers.

The Ahmadiyya is a fringe religious movement that traces its origins to British colonial India. It was founded at the end of the 19th century by Mirza Ghulam Ahmad, who saw himself as a messiah to “revive” Islam.

The movement claims to have up to 200 million followers, although mainstream Islamic scholars say the number is closer to 10 million people worldwide.

Leading religious scholars from the subcontinent consider the Ahmadiyya beliefs to be outside the fold of Islam and have also issued several religious edicts -- "fatwas" -- against them, in particular objecting to the Ahmadiyya belief that disputes Prophet Muhammad as the last prophet of Islam.