Heads of off-shot of PEGIDA -- who all quit their former movement last week -- say new body will not be a competitor to anti-Islam movement. 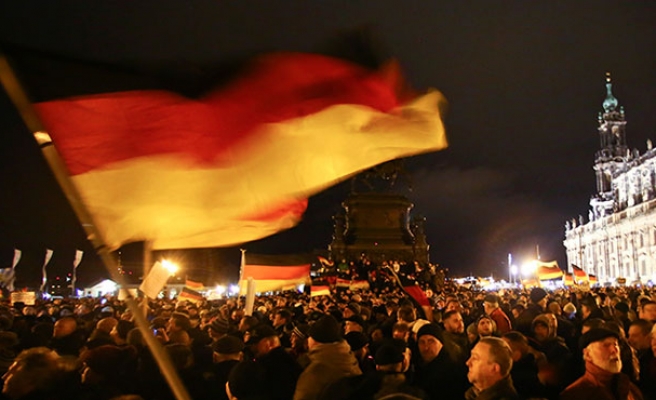 World Bulletin / News Desk
The former five leaders of the anti-Islam movement PEGIDA have announced the formation of a new conservative group.

Kathrin Oertel, the former spokeswoman of PEGIDA who was once the public face of the movement, said Monday that the Direct Democracy for Europe will organize its first rally Sunday in Dresden, a day before PEGIDA’s rally in the east German city.

She said at a press conference in Dresden: "We will be a people-oriented, conservative movement."

She emphasized the new movement would not be a competitor to PEGIDA, but would focus on challenges involving immigration and asylum.

Oertel and the five other former PEGIDA leaders stepped down last week following divisions within the group which erupted after a scandal involving the former leader of the far-right populist movement.

PEGIDA’s founder Lutz Bachmann stepped down on Jan. 21, amid an uproar sparked over his posting of a photo on Facebook in which he was dressed as the late Nazi leader Adolf Hitler.

The far-right, populist group made headlines in Germany and abroad last month as it gathered thousands in anti-Islam rallies organized in the eastern city of Dresden.

About 25,000 protesters joined PEGIDA’s rally on Jan. 12, in the aftermath of the attack on satirical magazine Charlie Hebdo in Paris in which 12 people died.

Dresden has been the stronghold of the group, but it has failed to draw similarly high numbers in rallies organized in other German cities.

Germany has witnessed an increase in suspicion and negative feelings towards Muslims in recent months as far-right and populist parties have sought to benefit from a growing fear of Islam, which was largely influenced by reports of murders and atrocities being committed by the Islamic State of Iraq and the Levant in the Middle East.

A recent study by the Bertelsmann Foundation has revealed that 57 percent of Germany’s non-Muslims perceive Islam as a threat -- a four percent increase since 2012.

Germany has the second-largest Muslim population in Western Europe after France.

Among the four million Muslims in the country, three million are of Turkish origin.

Leading Muslim organizations in the country say the source of the radicalization of some young Muslims is not Islam itself, but sociological problems they face, such as discrimination, unemployment or a lack of future prospects.