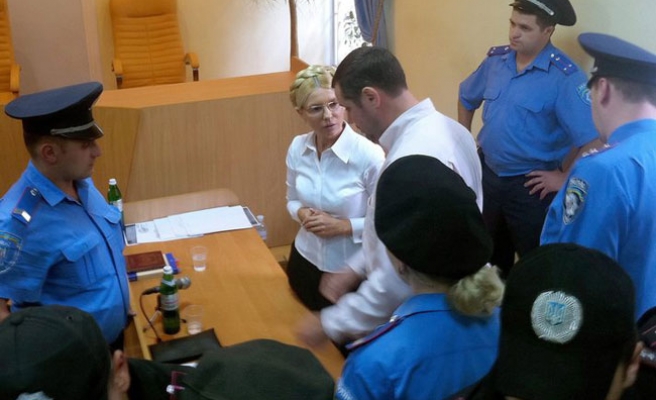 Former Ukrainian Prime Minister Yulia Tymoshenko, the country's leading opposition politician, was detained during her trial on Friday after the judge ruled that she was "systematically" disrupting courtroom proceedings.

In a move that is likely to draw the scrutiny of foreign governments, Tymoshenko was led from the courtroom and driven to a detention centre under a heavy police escort who jostled with supporters protesting and chanting "Shame!".

Charges of abuse of office against Tymoshenko, the fiercest opponent of pro-Russian President Viktor Yanukovich, have drawn criticism from the European Union, which is now in talks with the former Soviet republic to strengthen bilateral ties.

"We urge Ukraine to uphold the principles and common values that form the core of the Eastern Partnership," they said in a joint statement.

Tymoshenko, dressed in a white blouse and sporting her trademark platinum blond plait, was escorted from the courthouse after Judge Rodion Kireyev approved a state prosecutor's motion to take her into custody over "systemic violations" of rules.

He did not say how long the detention would last and adjourned the trial until Monday.

Tymoshenko, who twice served as prime minister between 2005 and 2010, says the case against her is politically motivated and has been fabricated on the orders of Yanukovich, who only narrowly beat her in last year's presidential election.

Yanukovich has denied any involvement with Tymoshenko's case while his government says her actions in the gas deal with Russia were a betrayal of national interests.

Since the start of the trial in June, Tymoshenko has openly mocked Judge Kireyev in the courtroom, refusing to stand when addressing him and calling him Yanukovich's "puppet".

"Just shoot me already," she fumed in response to the request for her detention, telling the judge to give the prosecutor a gun.

"(She has) exhausted the government's patience, they got fed up with her behaviour and decided to put her in her place," political analyst Volodymyr Fesenko of the Ukrainian think-tank Penta told Reuters.

"This is a sort of a test: how will people react in Ukraine, will (the opposition) be able to stage mass protests and how is the West going to respond to this."

Hundreds of Tymoshenko supporters massed outside the courtroom as dozens of policemen pushed against them to make way for the car that took her away.

Tymoshenko's party has called for her supporters to stage more rallies in front of the courthouse in downtown Kiev.

In 2001, Tymoshenko spent over a month in prison on tax evasion and corruption charges after falling out with then-president Leonid Kuchma but was acquitted in a trial.

Tymoshenko, 50, later became one of the leaders of Ukraine's 2004 "Orange Revolution" demonstrations that succeeded in blocking Yanukovich's first bid for the presidency, which had Kuchma's backing.

However, the Western-leaning coalition brought to power by the wave of popular street protests fell apart and discontent with the government's handling of the global economic downturn helped Yanukovich to win a rematch in February 2010.