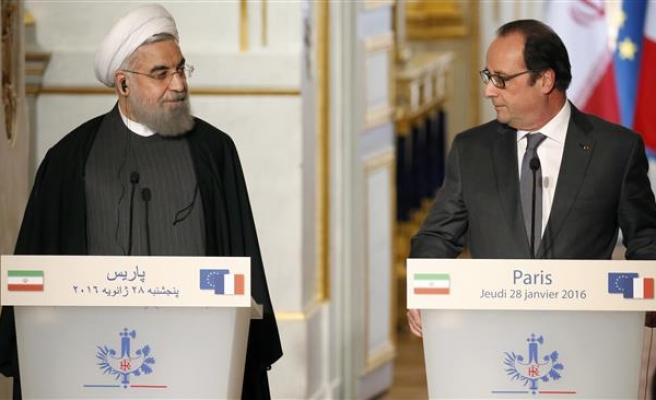 France and Iran heralded a series of major deals thought to be worth billions of dollars on Thursday as the two countries resealed trade ties following the lifting of sanctions against Tehran.

Iranian President Hassan Rouhani, visiting Paris as part of a tour that saw him stop in Rome earlier in the week, oversaw the signing of agreements in aviation, car manufacturing, oil and agriculture among other sectors.

“We are ready to turn the page on a new relationship between our countries,” Rouhani said in a speech to a Franco-Iranian forum at the headquarters of the Medef business federation.

“France has announced that it is ready to once again enter Iran with a new energy and a new will. We have also come here today to welcome French entrepreneurs, investors to begin economic activities in Iran.”

Rouhani, the first Iranian president to visit Europe since 1999, is in Europe following the lifting of sanctions put in place to control Iran’s nuclear program.

Prime Minister Manuel Valls, who was also present at the conference attended by business leaders and ministers, said he expected the countries to agree deals in health, agriculture and the environment. He called for “building long-term cooperation” with Iran.

“France is ready to mobilize its businesses, engineers and technicians, [its] extensive resources to contribute to the modernization of your country.”

On Thursday afternoon, Rouhani and French President Francois Hollande presided the signing of 20 bilateral agreements by ministers from the two countries.

Iran Air has signed a deal to purchase 118 aircraft from Airbus Group SE jetliners including 12 A380 super jumbos, a much anticipated agreement worth 22 million euros ($25 billion) according to initial estimates.

Among the contracts is a 400 million euro ($436 million) deal with carmaker Peugeot, which has ties to Iran spanning 50 years.

France's oil giant Total signed a letter of intent with Iran's NIOC on upstream oil, gas, petrochemicals, crude trading and crude purchasing contract. The company's CEO Patrick Pouyanne said earlier in the day the contract will allow Total to buy "between 150,000 and 200,000 barrels per day of crude oil”.

The French construction companies ADP / Bouygues and Vinci have signed for their parts protocol contracts to design, build and supervise extension projects for Mashhad and Isfahan airports.

"I do not want our relations to be kept simply in terms of economic agreements," said Hollande in a joint press conference with Rouhani after signing the deals, evoking the fight against terrorism and resolving the conflicts in the Middle East.

The two countries have a "shared responsibility" in the region, Hollande added.

Rouhani urged for using what he called the "positive space" which was created following the lifting of sanctions against Iran to make up for the "delay" in bilateral relations.

"We will maintain our commitments [regarding the nuclear program agreement] provided that the other party also fulfills all its commitments," emphasized the Iranian president.

As for the political transition in Syria, Rouhani refused to answer the question on possible concessions by his country on Syrian President Bash al-Assad, calling on the international community to "respect the will of the Syrian people”.

In Syria, it is not an "individual problem", said Rouhani, referring to Assad. "It is a problem of terrorism" created by the presence of ISIL, he added.