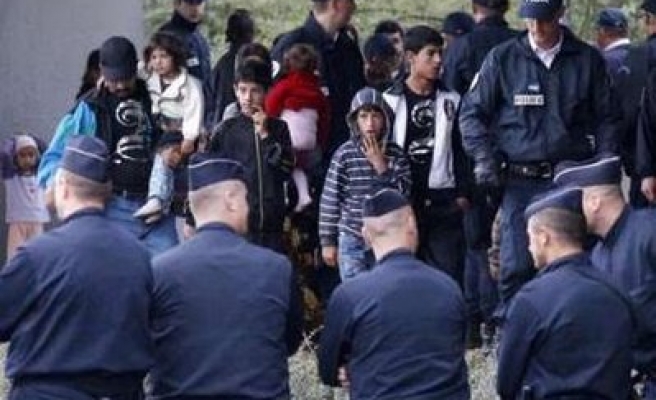 Under mounting pressure from Paris, Romanian representatives met French ministers and promised to do more to improve the lot their large Roma population, many of whom quit Romania in search of a better life in wealthier western Europe.

Police put 300 Roma on planes departing from Paris and Lyon, in the latest wave of what Sarkozy's government calls a voluntary repatriation scheme. The flights brought the number of Roma expelled from France this year to over 8,000.

French police also dismantled another campsite in Lille, one of hundreds of makeshift Roma staging posts being closed down and in some cases bulldozed away on orders from Sarkozy, whose tough law-and-order rhetoric helped sweep him to power in 2007.

Rights groups, left-wing political oppoenents and even some politicians from his own conservative camp have criticised the crackdown.

On Thursday, the Archbishop of Paris, Andre Vingt-Trois, added his voice to the chorus, saying the clampdown, by targeting Roma people in particular, had created an "unhealthy climate" even if the state was legally within its rights.

"I do not condemn the law ... but the application of the law is not always morally right", he told Europe 1 Radio.

A survey by pollsters CSA in French newspaper Le Parisien and conducted on Aug. 24-25, showed that 48 percent of respondents backed Sarkozy's crime drive, compared to 42 percent who opposed it.

Velentin Mocanu, a Romanian Secretary of State in charge of Roma questions, told reporters in France that his government would try to do more to integrate Roma people.

"We will put everything in place to enable the social integration of the Roma," Mocanu told a news conference during a break in talks with French ministers.

"These will be immediate measures which in some cases would focus on individual families to help them settle. But also, there will be broader measure on issues such as health, employment and education," Mocanu said.

More than 10 million Roma live in the EU, roughly a fifth of them in Romania. Forming the bloc's largest minority, they struggle with poverty and social exclusion, with limited access to education, health care and jobs.

Under the French crackdown, Roma who agree to leave the country receive 300 euros and an additional 100 euros for each of their children. But many have vowed to turn right around and come back to France.

As Romanian citizens they have a legal right to travel to other countries within the EU, but must demonstrate that they have obtained employment in order to stay legally in France beyond three months.