France to end military op in C.Africa this year

'I can confirm to you the end of Operation Sangaris during the course of 2016,' French defense minister says 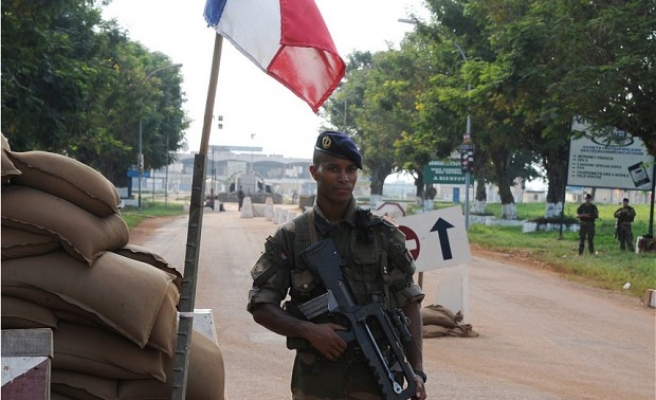 France will end its military intervention in the Central African Republic this year as it has achieved its objectives of restoring security to the country after three years of communal violence, the French defence minister said Wednesday.

"I can confirm to you the end of Operation Sangaris during the course of 2016," Jean-Yves Le Drian said in the capital Bangui.

France launched the mission in December 2013 as thousands were dying in ethnic violence between Christians and Muslims.

At the time, "the country was in the throes of civil war, torn by religious tensions, plagued by chaos, on the brink of pre-genocidal scenarios," Le Drian said. "In the space of two years, the Sangaris force restored calm and prevented the unacceptable.

"Of course everything is not resolved but we can finally see the country emerging from a long period of trouble and uncertainty", he said, speaking before French soldiers stationed at the M'Poko airport.

The CAR plunged into chaos in March 2013 when mostly Muslim Seleka rebels ousted President Francois Bozize, a Christian, and installed their leader Michel Djotodia in power for 10 months.

A transitional government was brought in under international pressure in early 2014.

Le Drian is in the country for the swearing-in on Wednesday of new President Faustin-Archange Touadera, elected in a run-off vote on February 14.

France, the former colonial power, had around 2,500 troops deployed as part of Operation Sangaris at its peak, supporting around 10,000 UN peacekeepers. But this has been reduced to about 900.

Le Drian did not indicate when the troops would be withdrawn this year.

But he said the pullout will be in parallel with the buildup of the 12,000-strong UN force, MINUSCA, and the European Union's training mission (EUTM RCA).

Around 300 French troops will remain in CAR, who will rejoin MINUSCA and take part in EUTM RCA, he said.

Some French units will also continue to provide security at the airport, and some troops based in Ivory Coast and in the Sahel region will be "ready to rapidly intervene" if necessary.

International operations in CAR have been dogged by sexual scandals after a slew of accusations of child sexual abuse against French and UN troops.