France warned it would recognise a Palestinian state if an international effort to overcome the impasse between Israelis and Palestinians failed, and proposed a two-year timeframe to end the conflict through a U.N.-backed resolution. 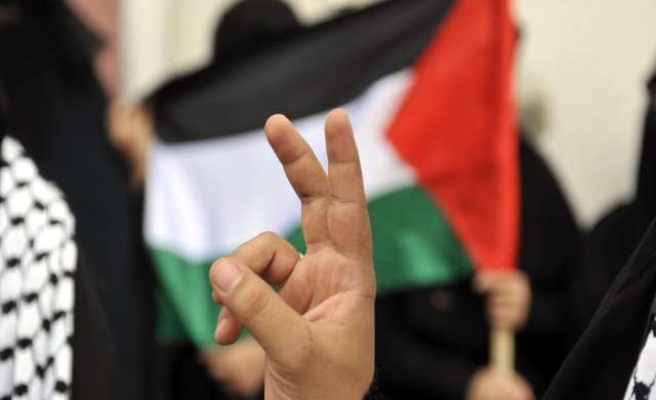 French Foreign Minister Laurent Fabius said on Friday that France will recognize Palestine as a state if peace efforts fail.

As French National Assembly began a debate on a resolution calling for the French government to recognize the State of Palestine, Fabius told French lawmakers that: "If this last attempt at negotiation does not succeed, France will assume its responsibilities by recognizing the State of Palestine."

The vote on the resolution which was proposed by the Socialist group, will take place on Tuesday Dec.2,  just few days before the French Senate votes on a similar resolution proposed by the Communist and Ecologist groups on Dec. 11.

Fabius said that he supports the recognizing of Palestine but "by the end of 2016 based on UNSC resolution."

"France recognizes the State of Palestine, it is not a favor...it is a right, “he said, adding that "France is a friend of the Israeli people and the Palestinian people... France will recognize the State of Palestine, the question is when and how? "Because it is necessary that this recognition should be useful to the efforts to break the deadlock and to contribute to achieving a final settlement of this conflict," he added.

He reiterated his opinion on his Twitter account, writing on Tuesday Nov.25: "Regarding the principle of the recognition of Palestine, France's position has always been there since 1947, it is the 2 states."

Most socialist deputies and senators are expected to vote for the resolution, except perhaps few dozen out of 289, who are close to Israel.

On the right, the Union for Popular Movement "intends not to vote," announced Christian Jacob, leader of UMP deputies.

On Tuesday morning, he said that the UMP deputies are now wavering "between non-participation and voting against."

Former French president Nicholas Sarkozy, who just got back to politics after a two-year political retirement when he announced in September he would seek to be elected chief of the UMP party in the Nov. 29 elections, has also urged deputies of his party to vote against the motion.

For the far right party, The National Front, the official party line is to recognize a Palestinian state.

FN Vice President Louis Aliot told French daily Le Figaro: "We are for the recognition of two states, who recognize each other, both living in security, on the condition that the Palestinian state recognizes the State of Israel and the fight against terrorism within it, which is not always the case today."

The French parliament is made up of two chambers, the National Assembly, which has the final say in drafting legislation, and the Senate.

Europe has been swept lately by a wave of support for Palestinian statehood, even as the peace process remains deadlocked.

The European Parliament was due to debate and vote on a motion recognizing the State of Palestine on Thursday Nov. 27, but because of disagreements over the wording of the motion, it was postponed to the Dec.18 plenary, according to a European Parliament press release.

The resolution -- proposed by the left-wing European United Left and Socialists and Democrats parliamentary groups-- is expected to eventually pass, despite Israeli efforts.

Israeli Prime Minister Benjamin Netanyahu said that European recognition of a Palestinian state was "a big mistake for peace."

But EU officials take a different point of view.

"We are the leading trade partner for Israel, and we are the leading donor for the Palestinian Authority. We can be the leading political player in the region, and we can facilitate a dialogue that has to take place directly between the Israelis and the Palestinians," EU High Representative Federica Mogherini said at the opening of a debate on the impact recognizing an independent state of Palestine would have on the Israel-Palestine peace process, as well as the wider region, on Wednesday.

"There is no security without a Palestinian state, and there is no way of having a Palestinian state if we do not also guarantee security, stability and peace to the Israelis. This very concept is at the core of the efforts that the EU has always worked on," Mogherini emphasized.

“The recognition of the state and even the negotiations are not goals in themselves. The goal in itself is having a Palestinian state in place and having Israel living next to it,” Mogherini added.

President of the Socialists and Democrats parliamentary group Gianni Pittella called on all EU member states to recognize the State of Palestine, stating that this is absolutely in line with the decision taken by the United Nations General Assembly on 29 Nov. 2012.

Denmark’s lawmakers will debate a similar motion in December and other parliaments are expected to vote on similar resolutions in the coming weeks, including the Danish, Italian, Slovenian and Portuguese legislatures.

Palestinian authorities estimate that 134 countries have now recognized Palestine as a state.