Hollande said at the NATO summit on Friday he would stay in office until the end of his mandate despite the record-low poll ratings. 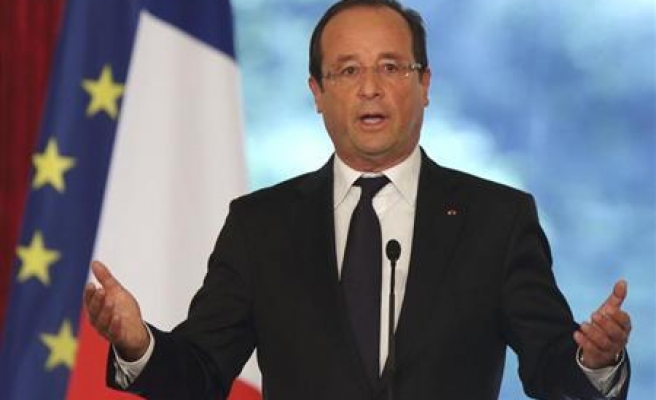 Most French people do not want Francois Hollande to seek a second term in the country's 2017 presidential election, a poll showed on Sunday, in the latest blow to the president whose popularity is already at record lows.

The poll showed that 85 percent of those questioned did not want Hollande to run for president again, with 50 percent blaming him for not delivering on his promises.

The poll by IFOP for French weekly Le Journal Du Dimanche was conducted between Sept. 5 and Sept. 6. and was based on a survey of 988 people.

The poll caps a week of bad news for Hollande, including the publication of a tell-all book by his former partner Valerie Trierweiler that described the Socialist president as being dismissive of the poor.

Hollande has lost support even among many left-wing voters largely due to frustration over his handling of the economy, where unemployment is close to a record high above 10 percent and growth nearly flat.

Hollande said at the NATO summit on Friday he would stay in office until the end of his mandate despite the record-low poll ratings.

The IFOP poll followed another on Friday by TNS-Sofres giving Hollande an approval rating at a record low of 13 percent in August, further securing his status as the most unpopular president in France since World War Two.

Boosted by the poll, Le Pen on Sunday reiterated her calls for the dissolution of the French parliament, where the ruling Socialists have a majority, saying the situation in France was "disastrous".

"It is more than necessary to let the French people speak again and to dissolve the national assembly," Le Pen told a meeting of the young members of her party in Frejus, Southern France.

"Polls are giving us hope. They show there is no longer a glass ceiling that would block our electoral victory," she said.

Le Pen's anti-immigrant, Eurosceptic party has been winning voters from mainstream political groups of both left and right amid record unemployment and growing disenchantment with a discredited French political establishment.

Prime Minister Manuel Valls told BFM-TV from Bologna where he had joined Italy's Prime Minister Matteo Renzi at the Festa de L'Unita: "I will not let myself by impressed by internal debates, and even less so by calls for resignation or dissolution and by a Far Right that believes it is close to gaining power."

Hollande has reshuffled his government twice since May mainly to respond to public dissatisfaction with economic policies that have failed to revive the French economy.

Last month, Hollande replaced his leftist economy minister Arnaud Montebourg, an opponent of budget austerity, which highlighted the internal wrangling in the government over how to tackle France's economic problems.

In a further setback, Hollande on Thursday accepted the resignation of Thomas Thevenoud, a junior minister for trade appointed just 10 days ago in the second reshuffle.

Thevenoud has said that he neglected to file a tax return for several years, but has since put his tax situation in order and hopes to remain a member of parliament.