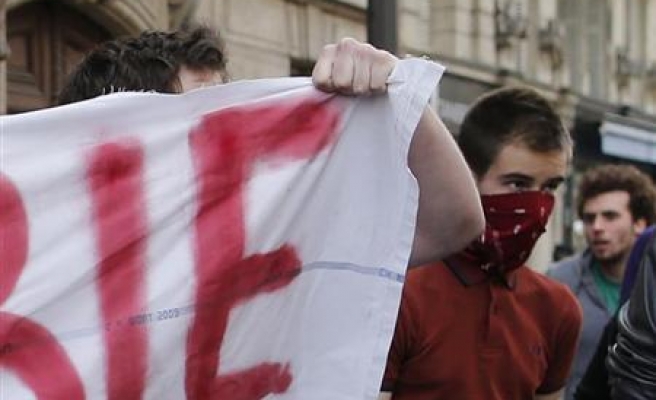 France's far-right National Front, buoyed by improving poll numbers, is aiming for big gains in municipal elections next year and the top spot in the European parliament ballot, its leaders said at the party's annual convention.

The two 2014 elections, the first since the Socialists came to power in 2012, will dominate the political agenda in the euro zone's second-largest country for the next nine months.

In a strategic shift for a party long content with attracting protest votes in national polls, the National Front says it wants to build a local base with the March municipal elections as a step to one day ruling the country - ambitions that are a growing headache for mainstream parties.

"Our strategy is to win as many municipalities as possible and get hundreds of city councillors elected to be there for the long run. It's a condition for winning at the national level and the presidency," party leader Marine Le Pen told reporters at the weekend convention in Marseille.

"We have every reason to work with enthusiasm because we'll be in power in the next 10 years," said the 45-year-old, who replaced her paratrooper father as party chief in 2011.

The party has a long way to go before it could be included in any government, but opinion polls show it is gaining ground as both the Socialists and the main conservative opposition UMP agonize over how to counter the far right and appeal to voters.

More than a third of French voters say they are sympathetic to the ideas of the party, whose agenda focuses on concerns about immigration, rejection of Europe and disillusion with mainstream politicians, a survey showed earlier this week.

The UMP, deeply divided since Nicolas Sarkozy lost the 2012 presidential election, is shaken by near-daily rows over whether to veer more towards the National Front's agenda.

For the Socialists, who devoted part of their own summer convention to debate the role of the National Front, the popularity of right-wing party's anti-austerity, anti-EU stance is challenge as the government must rein in the budget deficit.

Some 16 percent of those surveyed in a CSA poll plan to vote for National Front candidates in the municipal polls, the survey showed on Friday, four points more than six months ago.

All in all, the National Front hopes to see 1,000 to 1,500 candidates elected to city councils, its secretary general, Steeve Briois, said.

Although the number is a small share among France's more than 36,000 municipalities, it would be a big increase from the 60 won in the last municipal elections in 2008.

The party has even more ambitious plans for May's European Parliament elections where Eurosceptic, nationalistic parties usually do well.

"We can be first in the European elections, I'm certain about that," Briois told Reuters, adding that party officials were in contact with the Dutch anti-Muslim party of Geert Wilders about cooperation for the election.

"The issues discussed in this election are the ones we've always focused on," he said, citing the impact of European integration on immigration, security and jobs.

Academic Sylvain Crepon, an expert on the National Front, says that while the party is aiming for incremental increases in municipal seats to progressively build credibility on the ground, it has a shot at an outright victory in the EU vote.

"It can play on the protest vote, in a context of doubt about the EU and the euro," he said. "It could become, just for this election, symbolically, the first party of France, or the second. That would be a thunderbolt."

Once famous for Jean-Marie Le Pen's outbursts on immigration and anti-Semitic remarks, the party has worked to improve its image since his daughter took over.

But despite the media-friendly, open attitude and the youth of many clean-cut supporters at the convention site in Marseille, the party's agenda remains essentially unchanged.

In a classic National Front speech, Marine Le Pen concluded the meeting with tough talk on immigration, by criticising mainstream parties and the EU and by saying that social housing and family benefits should only go to French nationals.

Jean-Marie Le Pen got hundreds cheering and clapping with a speech on Saturday when he denounced immigration and Islamism as "fatal scourges" for France.