Twenty-six people have been killed in fighting in the capital Kiev. 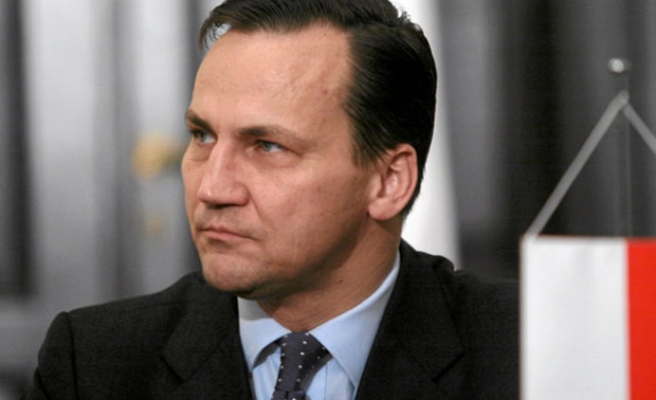 The foreign ministers of France, Germany and Poland will travel to Kiev on Thursday to assess the situation before a meeting in Brussels to decide whether to impose sanctions on Ukraine, French Foreign Minister Laurent Fabius said on Wednesday.

"With my Polish and German colleagues we have decided to go to Kiev tomorrow morning ... to gather the latest information before the meeting in Brussels," Fabius said alongside U.S. Secretary of State John Kerry.

Kerry said the U.S. was discussing with its allies the possibility of sanctions and said there was still time to reach a compromise.

16:00 - Kerry to reiterate U.S. open to sanctions on Ukraine

US Secretary of State John Kerry is expected to reiterate that the United States is open to imposing sanctions on Ukraine, a U.S. official said on Wednesday.

The official noted the Obama administration has previously raised the possibility of sanctioning Ukraine.

Hungary supports proposals to impose sanctions on Ukraine if it fails to resolve a crisis after clashes between protesters and police in Kiev killed and wounded dozens of people, a Hungarian Foreign Ministry spokesman said on Wednesday.

"We support them," Gabor Kaleta told Reuters on the sidelines of a news conference when asked about a Polish call for European Union leaders to impose sanctions.

"The Ukrainian government has a decisive role in resolving the situation and if it does not fulfil this responsibility, then it will have to be enforced by international sanctions as well," Kaleta added.

"I reiterate my call for respect for the right to peaceful assembly, as provided under international human rights law, to be respected," Pillay said in a statement.

"I also call for an urgent and independent investigation to establish facts and responsibilities, including the possible use of excessive force, and to ensure accountability for these deadly clashes," she added.

Dozens of Ukrainians blocked a road to a border crossing into Poland, the Polish boarder guard service said, adding that no other crossings had been affected so far.

"We have received information from people who still managed to cross the border that about 200 Ukrainians were blocking this morning the road to the Korczowa crossing. There could be about 300 now," a border guard press officer told Reuters.

"We cannot be sure but some information suggests that they are oppositions protesters," the press officer added.

The blockage was reported inside Ukrainian territory, near the crossing over the border to the Polish village of Korczowa.

European Union foreign ministers will hold an emergency meeting on Ukraine in Brussels on Thursday, an EU official said.

The ministers are expected to discuss imposing sanctions on people responsible for violence and the use of excessive force during protests in Ukraine, which killed at least 25 people

Russia demanded that Ukrainian opposition leaders "stop the bloodshed" in Kiev and said Moscow would use all its influence to bring peace to its "friendly brother state".

"The Russian side demands that leaders of the (opposition) stop the bloodshed in their country, immediately resume dialogue with the lawful authorities without threats or ultimatums," the Foreign Ministry said in a statement.

"Ukraine is a friendly brother state an a strategic partner, and we will use all our influence in order for peace and calm to reign," it said, without giving any detail about what steps Russia might take.

Ukrainian President Viktor Yanukovich wants fresh talks with the opposition on Wednesday, boxer-turned-politician Vitaly Klitschko told a German newspaper, adding that he was willing to attend - if police stopped their actions against protesters.

"The president wants another meeting with the opposition today and we are willing," Klitschko was quoted as saying on the website of Bild newspaper, where he is a regular columunist.

"Our demand is clear: the deployment of the police against demonstrators must stop immediately, there must be an immediately ceaseful for negotiations," he told Bild.

European Union governments are expected to urgently agree sanctions against those responsible for violence and use of excessive force in Ukraine, European Commission President Jose Manuel Barroso said on Wednesday.

"We have ... made it clear that the EU will respond to any deterioration on the ground. We therefore expect that targeted measures against those responsible for violence and use of excessive force can be agreed by our member states as a matter of urgency," Barroso said in a statement.

"We call on all sides to immediately put an end to the violence and engage into a meaningful dialogue, responding to the democratic aspirations of the Ukrainian people," he said.

France and Germany will discuss the situation in Ukraine with individual sanctions "probable", French Foreign Minister Laurent Fabius said, a day after 25 people were killed in the country.

"We are not going to remain indifferent," he said. "(There will be) deliberations with the German delegation and probably sanctions," he said, referring to the possibility of European measures. France and Germany were already scheduled to hold a joint meeting of their cabinets in Paris later on Wednesday.

"There can be a range of sanctions, notably individual ones against those behind the violence."

"I will today hold talks with the leaders of the biggest EU countries and institutions, and persuade them to impose sanctions - personal and financial," Tusk told a special session of the Polish parliament.

"I hope that such a stance from Poland will help the EU as a whole in taking fast decisions."

Twenty-five people have been killed in fighting between anti-government protesters and police in the capital Kiev, the Ukrainian Health Ministry said in a statement on Wednesday.

The Interior Ministry said nine police officers were among the dead.

06:23 - President urges opposition to step away from radicals

President Victor Yanukovich urged leaders of the opposition to dissociate themselves from radicals and warned them that otherwise he will "talk differently" with them.

Yanukovich also said in a statement some members of the anti-government opposition had crossed a line when they called on their supporters to bring weapons to the demonstration in the central square of Kiev.

The president called those people "criminals" and said they would face justice in court.