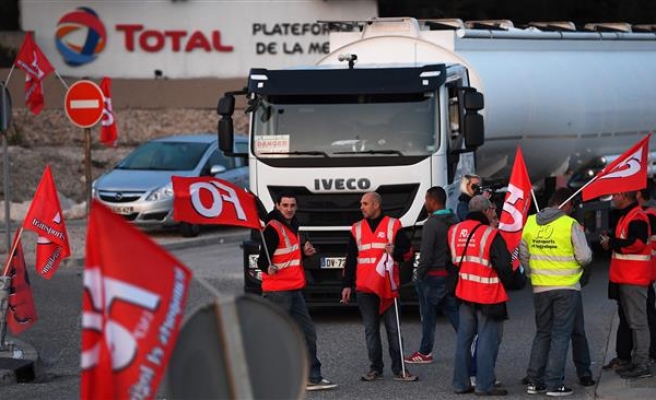 French truck drivers on Monday set up roadblocks and held go-slow operations on highways near Paris and in northern France to protest the labor reform.

The protest began on the calls of France's major unions after French President Emmanuel Macron on Friday signed into law five decrees of controversial reforms, changing the country's labor code.

The General Confederation of Labor (CGT) and Workers' Force (FO) called on their members to protest the law change what Macron described as a reform of an unprecedented magnitude under the Fifth Republic.

According to local media reports, many trucks have blocked the roads leading to eight oil depots and not allowing oil transfer to fuel stations.

The unionists have also applied go-slow driving on highways disrupting the traffic in Paris's Port de Gennevilliers while some others blocked the A22 road near Belgium border.

Hundreds of thousands across France had taken to the streets to protest the reforms last week before Macron signed the decrees in a televised ceremony.

The decrees will become law in the coming days and take effect by Jan. 1 next year after other completing decrees are signed before the end of 2017.

They give more flexibility to employers to set pay and working conditions; allow small businesses with less than 20 employees to negotiate directly with staff without union intervention; give greater freedom to companies to hire and fire; and limit payouts for unfair dismissals.

Philippe Martinez, the head of the Communist Party-linked CGT, branded the reforms a "social coup d‘etat".

France has an unemployment rate of 9.5 percent, double that of the other big European economies such as Germany. Macron has vowed to cut it to seven percent by 2022.