G7 willing to step up sanctions on Russia over Ukraine 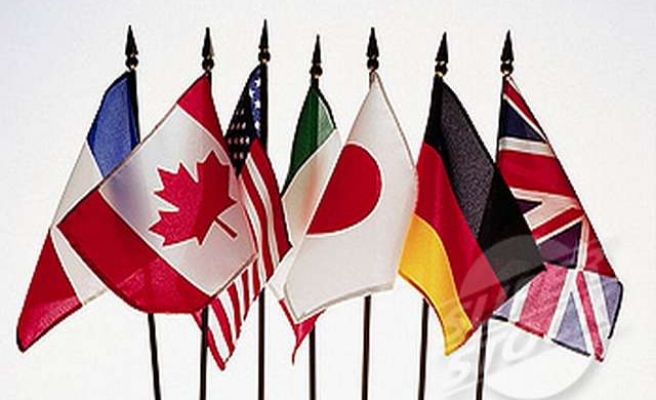 The world's leading industrialised nations threatened on Wednesday to impose harder-hitting sanctions on Russia if it does not help restore stability to eastern Ukraine, where pro-Russian militias continue to operate at will.

While Ukraine was able to hold a largely peaceful presidential election last month, the situation in the east near the Russian border remains volatile, with armed groups attacking Ukrainian government forces and occupying state buildings.

"We stand ready to intensify targeted sanctions and to consider significant additional restrictive measures to impose further costs on Russia should events so require," the G7 said in a statement after evening talks in Brussels.

German Chancellor Angela Merkel said Western powers would check "again and again" to verify that Russia was doing what it could to stabilise the situation, which erupted in March after Russia seized Crimea from Ukraine and annexed it.

"If we do not have progress in the questions we have to solve there is the possibility of sanctions, even heavy sanctions of phase 3 on the table," she said, referring to restrictions on trade, finance and energy.

So far, the United States and European Union have imposed relatively minor travel bans and asset freezes on dozens of Russian officials in reaction to the seizure of Crimea.

Further steps were threatened if the May 25 elections were affected. However, they went smoothly and new President Petro Poroshenko will be sworn in on Saturday.

Some saw that as an indication that Russia was being more cooperative, reducing the threat of further sanctions. But Wednesday's statement suggests the West is not yet satisfied that President Vladimir Putin is doing enough to calm the situation.

While Putin has been cut out of the G7 - this is the first meeting without Russia since it joined the club in 1997 - he will hold face-to-face meetings with Merkel, French President Francois Hollande and Britain's David Cameron at a D-Day anniversary gathering in France later this week.

Asked about those bilateral meetings and whether they raised any concerns for President Barack Obama, who has pointedly avoided any contact with Putin, a U.S. official said it wasn't important who Putin met but "what people say in those meetings".

Ahead of the G7 summit, Obama met Poroshenko for talks in Warsaw and declared him a "wise choice" to lead Ukraine, part of efforts by the EU and the United States to provide moral and financial support to the new leadership.

Poroshenko, a chocolate-industry billionaire, said he would be willing to meet Putin for peace talks on the sidelines of the D-Day commemorations in Normandy although no meeting has been set up.

"As things stand now, a meeting between me and Putin is not envisaged, but I do not rule out that it could take place in one format or another," he told reporters, adding that he was working on a peace plan for Ukraine that would involve the decentralisation of power, local elections and an amnesty.

A separate communique will be released by the G7 leaders after talks on Thursday which will highlight the need to prioritise security of energy supplies.

"The use of energy supplies as a means of political coercion or as a threat to security is unacceptable," a draft of that statement, seen be Reuters, said.

The leaders will reaffirm a commitment to completing financial reforms this year including ending "too-big-to-fail" banking.