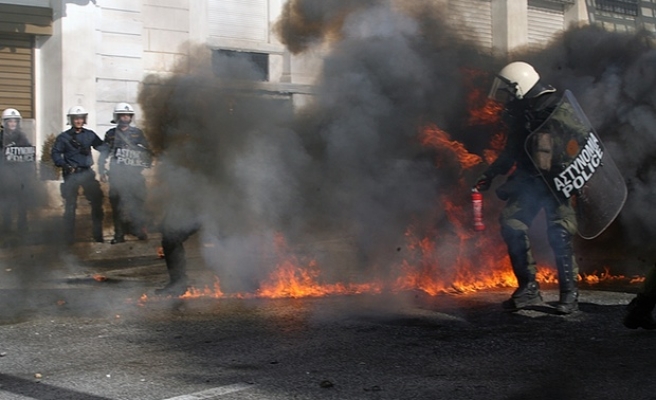 Tear gas and Molotov cocktails have been deployed during a demonstration in Syntagma Square, Athens, where a general strike is taking place.

Thousands marched across Greece Thursday as diverse classes united in a crippling general strike over a pension overhaul that has sparked a major backlash against embattled leftist Prime Minister Alexis Tsipras.

Police said around 40,000 people joined protests in Athens and another 14,000 in Thessaloniki for the 24-hour industrial action -- the third general strike in as many months -- that has stopped train and ferry services and grounded dozens of flights.

Opposition to the pension reform -- a key part of Greece's latest economic bailout -- has led to the rare sight of white-collar staff marching alongside workers.

Lawyers, notaries, insurers and engineers have joined the protests en masse in action the media have dubbed the "necktie movement."

"They have massacred my generation. We can no longer get married or have children," said Dina, a 32-year-old who owns an underwear shop and was marching in Athens, referring to five years of austerity cuts under Greece's successive economic bailouts.

Tsipras is accused of breaking his promise to eliminate austerity when he came to power last year.

"The pledges were hot air," read black balloons carried in the protest.

One group marched behind a banner in Chinese opposing the imminent privatisation of the Piraeus port authority by Chinese shipping giant COSCO.

Many traders shut their shops in solidarity, petrol stations were closed and taxis pulled off the streets. Hospitals were also operating on an emergency footing.

Farmers have formed protest hubs at dozens of locations on national highways, intermittently blocking traffic with tractors, continuing demonstrations that have been going on for two weeks.

On Tuesday, they blocked freight trucks from travelling into Bulgaria and Turkey, causing long lines on the respective borders.

The strikers are furious at government plans to lower the maximum pension to 2,300 euros ($2,500) per month from 2,700 euros currently and introduce a new minimum guaranteed basic pension of 384 euros.

"It's true that the pension system requires reform but this reform cannot make it viable," lawyer Thomas Karachristos told AFP.

Critics say the new system penalises those who dutifully pay their pension contributions over a lifetime of work and will encourage undeclared labour practises.

But Greece must save 1.8 billion euros from state spending on pensions under a three-year bailout signed with the European Commission, the European Central Bank and the International Monetary Fund in July.

The Tsipras government has warned the nation's pension system will soon collapse without the reform, which is expected to be put to a vote later this month in parliament, where the prime minister has only a razor-thin majority.

However, the government has rejected claims that the disputed overhaul has raised questions about its survival.

The Tspiras government has only a majority of 153 in the 300-seat parliament.