Garibashvili said he was concerned that the political upheaval in Ukraine could destabilize the wider region. 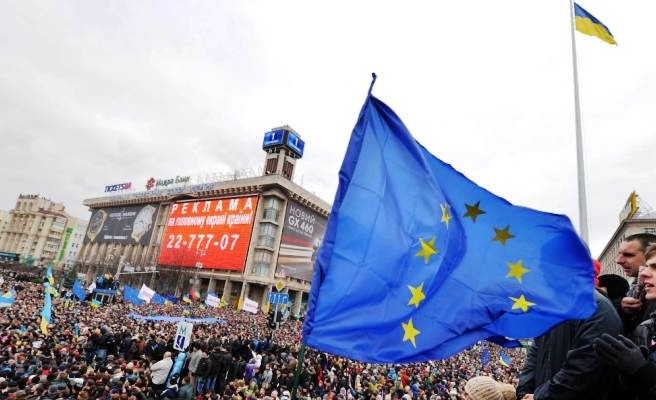 Georgian Prime Minister Irakly Garibashvili on Tuesday urged Ukraine to consider following his country's path of integration with the West through increased trade and investment, as it grapples with its future.

In an interview with Reuters in Washington, where he met President Barack Obama and Vice President Joe Biden for talks, Garibashvili said he was concerned that the political upheaval in Ukraine could destabilize the wider region.

His visit to Washington and another next week by Moldova's Prime Minister are aimed at showing U.S. support for two former Soviet republics that are undergoing a transformation and have balked at pressure from Russia.

"Of course the recent developments may have implications on the wider region and that's why we are concerned," said Garibashvili. "I very much hope that Ukraine will go back to its path to its European choice," he added while emphasizing it was up to Ukrainians to decide which path to follow.

Still, he added: "I think the Georgian way is something that they should look at and should consider."

Like Ukraine, Georgia has also been caught in the middle of a tug-of-war between integrating with Europe and the West or staying under the influence of Moscow.

While Georgia initialed an accord in November to deepen trade and cooperation with the European Union, Ukraine bowed to pressure from Moscow and suspended plans to sign trade and other deals with the EU.

Unrest erupted in Ukraine after President Viktor Yanukovich abandoned a proposed trade pact with the EU in November and turned instead toward Moscow, which offered loans and cheaper supplies of natural gas. In a dramatic turn of events at the weekend, Ukraine's parliament voted Yanukovich out of office and set early presidential elections for May 25.

Russia is trying to maintain its influence over the newly-independent states it dominated during the Soviet era, especially those with energy pipelines and large ethnic Russian communities.

Garibashvili said he was particularly concerned with reports on Tuesday of protests in Russian-speaking Crimea on Ukraine's southern peninsula where there have been calls to secede from Ukraine.

While Georgia is further from Moscow's orbit than Ukraine, tensions between Russia and Georgia have remained high after a 2008 war over two Moscow-backed breakaway regions. Garibashvili said Russian forces had recently resumed installing a barbed wire fence on the border of breakaway South Ossetia.

While he expected such actions from Russia to continue, Garibashvili said Tbilisi was seeking a balanced relationship between East and West by deepening ties with the West and carving out a more constructive relationship with Moscow.

"We made a firm decision to sign the association agreement with the European Union. At the same time we are trying to normalize relations with Russia and having this constructive policy with them," he said.

"Therefore we need to find a balance, how to balance this. And we have to persuade the Russian authorities that Georgia's European integration does not conflict with the Russian interest. That's our mission," Garibashvili added.

He said surveys in Georgia showed that 85 percent of Georgians supported more integration with the West and away from Russia's fold.

Garibashvili also said he was seeking closer economic ties and other relations with the United States in efforts to develop the Georgian economy, which the government has forecast will expand by at least 5 percent this year.

"Developing the economy is a priority for my government and we made structural reforms and the result is just getting to be felt," the prime minister said.