The rally was also the first since Lutz Bachmann, the movement's leader, resigned. 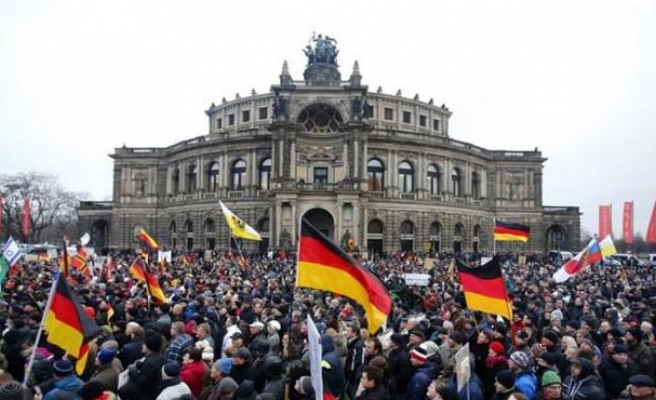 The number of anti-Islam protesters who turned out for a rally in the east German city of Dresden shrank from a record two weeks ago when turnout was likely boosted by the attack on French satirical newspaper Charlie Hebdo.

The rally was also the first since Lutz Bachmann, the movement's leader, resigned after the discovery of a photo in which he posed as Hitler and reports that he called refugees "scumbags" prompted prosecutors to investigate him for inciting hatred.

Police said around 17,300 protestors took part in the demonstration organised by PEGIDA, or Patriotic Europeans Against the Islamisation of the West - fewer than the 25,000 who attended the previous demonstration on Jan. 12.

Protesters waved the German flag and carried posters bearing slogans such as "Against forced Islamisation" while Kathrin Oertel, a PEGIDA co-founder, drew applause with her demand that "Islamists and religious fanatics should be expelled and not allowed to re-enter".

Up to 5,000 people took part in counter-demonstrations in Dresden on Sunday calling for "cosmopolitanism and tolerance", police said. They carried posters saying "Refugees welcome" and "Dresden is colourful".

German Foreign Minister Frank-Walter Steinmeier said in an interview with newspaper Bild am Sonntag that PEGIDA's anti-Islam protests were damaging Germany's reputation in the world.

"In Germany the damage that PEGIDA's xenophobic and racist slogans and posters have already done is underestimated," he said.

Several premiers of eastern German states called in German newspaper Welt am Sonntag for more foreigners to come to Germany, which is facing a skilled labour shortage and has one of the lowest birth rates in Europe. They said eastern Germany particularly needed more immigration.