German election results not likely to make a change for Turks

Since the CDU is likely to dominate in the coalition given its success in the elections, Germany's policy towards Turkey's EU membership is expected to be the same as a “state policy.” 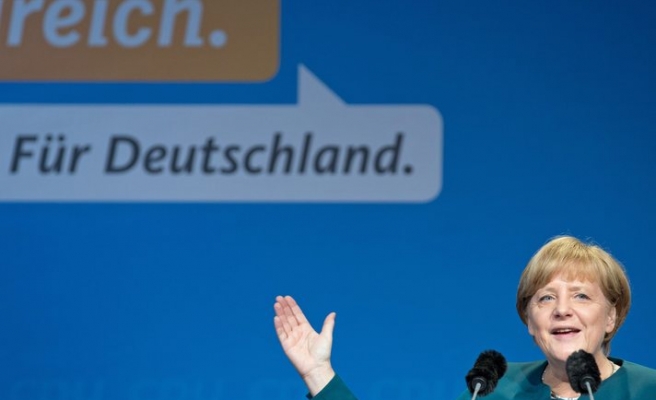 As German Chancellor Angela Merkel renewed her mandate for a third time in Sunday's elections, the election results are not expected to have an impact on the status of Turks in Germany, or Turkish-German relations for that matter.

Although Merkel increased the Christian Democratic Union of Germany (CDU)/Christian Social Union of Bavaria (CSU) votes by 7.7 percent to 41.5 percent and received 311 seats out of 630, she slightly falls short of the absolute majority that is required to form a single party government. Since her coalition partner the liberal Free Democratic Party (FDP) stayed out of parliament for the first time in its history, Merkel will have to look for new coalition partners in the weeks to come, despite her tight win. After two decades Merkel's CDU party has gained 40 percent of the vote.

Since the CDU is likely to dominate in the coalition given its success in the elections, Germany's policy towards Turkey's EU membership is expected to be the same as a “state policy.” However, analysts say that in case the Greens become part of the government, they would favor Turkey's full membership to the EU.

Yet, even CDU officials reiterated several times that they desire the continuation of the negotiation process despite occasional hiccups in their relations and despite the tension between Merkel and Prime Minister Recep Tayyip Erdoğan. As a development worth noting, German Foreign Minister Guido Westerwelle, who has been a close ally with the Erdoğan government, lost his seat in parliament. Currently, there are no candidates who stand out to fill his position.

As far as immigration policies towards the Turks, the largest minority group in Germany, are concerned, the overall atmosphere on the day after the election is that nothing is going to change in their status. Merkel's CDU has never promised dual citizenship. Observers state that the option model, which requires the preference of one passport over the other for Turkish immigrants between the ages of 18 and 22, will remain the same.

The head of the Berlin Turkish Society, Bekir Yılmaz, told Today's Zaman that he does not believe the election results will make a difference for Turks in Germany. Although he finds the election of a higher number of Turks into parliament pleasing, he believes that it is also important who is elected to the Bundestag. According to him, Turks should take advantage of the interest of German parties in immigrant votes.

A historic 11 parliamentarians of Turkish origin

An unprecedented high number of politicians of Turkish origin entered parliament in Sunday's elections. Five out of a total of 11 Turkish politicians are from the SPD: Aydan Özoğuz, Metin Hakverdi, Cansel Kızıltepe, Mahmut Özdemir and Yüksel Gülistan.

For the first time in its history the CDU nominated a Turkish Muslim woman from its party for the federal parliament: Cemile Giousouf, who made it to the Bundestag on Sunday.

Cem Özdemir, the first politician of Turkish origin to be elected to parliament from the Greens in 1994, has been re-elected. Ekin Deligöz and Özcan Mutlu are the other names who entered parliament from the Greens. The Left Party, known for its sympathetic stance towards the terrorist Kurdistan Workers' Party (PKK), will be represented by two female politicians of Turkish origin in parliament: Sevim Dağdelen and Azize Tank.

The day after the federal elections, no statistical data were available on the voting behavior of Turkish immigrants in Germany. A higher voting turnout was expected by civil society organizations due to a campaign conducted to encourage Turks in Germany to vote. Although the number of Turkish voters is estimated between 600,000-900,000 people, there is still a significant number of Turks, especially from first-generation immigrants, who chose not to become German citizens and hence are not eligible to vote.

Meanwhile, the BİG Party, which predominantly consists of Turkish immigrants and people of other foreign descent, received 2,678 of the first votes and 17,695 of the second votes.

Turkish Ambassador to Germany Hüseyin Avni Karslıoğlu told Today's Zaman that Turkey is happy to witness an increase in the number of deputies of Turkish origin as such a picture displays a good example of integration. “We hope they would constitute a substantial connection between Germany and their root country,” he further added.

Giousouf, the first Turkish Muslim deputy at the federal level from Merkel's Christian Democrat CDU, told Today's Zaman that it is not only sufficient to nominate a candidate of foreign origin but to make the issue of integration a state-level priority. She stated that her party, the CDU, had seriously addressed the integration issue, unlike the SPD and the Greens, who both shaped their policies around dual citizenship and the EU, which is not enough for immigrants. She added that it was the CDU which nominated the first integration minister, Armin Laschet, as well as the first state minister of Turkish origin, Aygül Özkan.

Giousouf's mother, Meliha, and father, Yusuf, told Today's Zaman that they are proud of their daughter's success as they urged all Turks eligible to vote to cast their votes in the German elections.

Commenting on the results of the German elections, Turkish Deputy Prime Minister Bülent Arınç said on Monday in İstanbul that Merkel had protected her power and even increased it and will probably establish a coalition. “I would like to congratulate the esteemed Angela Merkel,” Arınç said as he noted that the debate over a coalition is a domestic matter of Germany. He said Turkey would not lose anything as a result of these election results, but gain instead. “I think Merkel will pay more attention to Turkey's cooperation and friendship,” Arınç added.