French president says plan is based on restoring Crimea, eastern provinces to the war-torn country. 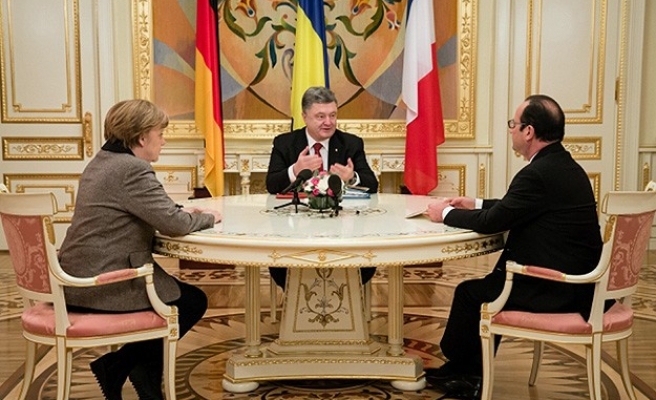 The leaders of Germany and France are expected to take peace proposals toMoscow on Friday on the second leg of a dramatic initiative to end a conflict in Ukraine that has killed more than 5,000 people and driven Russia-West relations to new lows.

Back in their respective capitals in between, Hollande called the talks "the first step", while Merkel said it was unclear whether the meeting in Moscow would secure a ceasefire.

Their initiative follows fierce fighting and territorial gains in eastern Ukraine by Russian-backed separatists since a peace blueprint was agreed in Belarus in September.

The Ukrainian military reported that two more soldiers had been killed in the past 24 hours in the east, with 26 wounded.

The growing military pressure has shaken the Ukrainian economy and driven a debate over the possibility of the United States providing Kiev's hard-pressed army with arms.

Merkel said she and Hollande were not on the road as neutral mediators but were representing European interests. "These interests are peace, maintaining Europe's peaceful order."

A statement on Poroshenko's website said the sides had expressed the hope that "Russia had an interest in" a peaceful settlement of the conflict.

For Moscow's part, Russia's ambassador to France Alexander Orlov told Europe 1 radio there was an urgent need to avoid war. "I wouldn't say it's a last chance meeting, but it's not far off," he said.

Merkel's spokesman Steffen Seibert said there "was no sign whatsoever" of a breakthrough so far.

The Ukrainian presidential statement said he and the German, and French leaders had called for a quick ceasefire, the withdrawal of foreign forces from Ukraine, the pull-back of heavy weapons and equipment, the closure of the border and the release of all prisoners.

On the ground, the rebels are advancing on a railway hub held by Ukrainian troops, who are almost encircled.

A collapse in Ukraine's hryvnia currency further highlighted the importance of reaching a deal. It lost nearly a third of its value on Thursday after the central bank halted daily auctions at which it sold hard currency to banks.

Though details of the peace deal were under wraps, much might depend on whether Ukraine is being pressed to acknowledge existing front lines as the new negotiating reality - and whether Kiev would accept this.

German government sources said on Thursday the key problem for resuming peace talks was that current front lines no longer tally with what was agreed at talks in Minsk, Belarus, last year.

One idea was that a new attempt at a ceasefire should take in the current front lines, which reflect rebel gains, without Kiev having to give up its claim to these areas as part of the Ukrainian state.

German government sources continued to say however on Friday that the Minsk talks last September were still the basis for negotiations - the view also of Kiev, France and the United States.

Ukrainian Prime Minister Arseny Yatseniuk said on Thursday that Kiev would not consider any peace plan that cast doubt on the nation's territorial integrity, sovereignty or independence.

NATO says Russia has provided vital support to the rebels in the shape of weapons, funds and troops, something denied by Moscow.

Speaking on BBC radio on Friday, Ukraine's ambassador at large, Dmytro Kuleba, said: "What was discussed yesterday is not a new peace plan actually, it is a set of steps that will allow to implement the existing peace plan and that is the Minsk agreement signed back in September also by Russia.

"We are not speaking about a completely new initiative. It is a set of steps and decisions that will allow to implement commitments already undertaken," he said.

Speaking after meeting Poroshenko in Kiev on Thursday, U.S. Secretary of State John Kerry said Washington supported diplomacy, but would "not close our eyes" to Russian tanks and troops crossing the border.

U.S. President Barack Obama will decide soon whether to provide Ukraine with lethal weapons to fight the separatists, Kerry said.

Asked by Europe 1 to react to reports of possible U.S. arms supplies to Ukraine, Russia's ambassador to France Orlov said: "We are not afraid of that but it would be madness because that would be like pouring oil on the fire."

The rebels have been concentrating on Debaltseve, a rail hub northeast of the big city of Donetsk, where a government garrison has held out despite being nearly encircled.

A temporary truce appeared to be in force around the town on Friday as convoys of buses converged from two sides to allow civilians to be evacuated. Ukrainian authorities said, however, that their forces remained in full control of the town.

A Reuters correspondent who reached Debaltseve with the rebel convoy of buses saw several homes peppered with splinters and shell holes. North of the town there was the sound of sporadic artillery in the distance, but otherwise there was no firing.