The BIG Party, founded by Turks residing in Germany to participate in the Sept. 11 general elections, has held a meeting over a threat they received from the far-right NPD 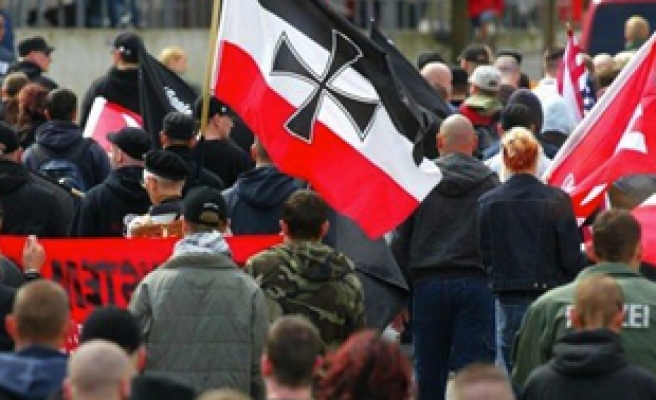 The BIG Party, founded by Turks residing in Germany to participate in the Sept. 11 general elections, has held a meeting over a threat they received from the far-right National Democratic Party of Germany (NPD).

Germany's intelligence agency describes the NPD as racist, anti-Semitic and inspired by the Nazis. Its local election campaigns blame immigrants for crime and unemployment and its supporters are mostly unemployed young men with little education in depressed areas of the east.

The BIG party which in German stands for Bündnis für Innovation und Gerechtigkeit, meaning Alliance for Innovation and Justice, was the first immigrant party to take part in the general elections in Germany. The president of the party, Haluk Yıldız, readying the party for the general election, held a meeting at Park Restaurant&Deluxe -- a well-known spot in Duisburg -- with many Turkish NGO representatives and party members in participation.

Yıldız made his opening speech talking about party's general election strategy and continued by mentioning that they had received a threatening letter from the right-wing extremist NPD.

He said: “An administrator from the NPD sent threatening messages with authentic signatures on them to 10 of our candidates. The messages started with the use of the term ‘immigrant' as a mode of address.”

According to Yıldız's statement, the threat said “Go back to wherever you came from. You are a visitor here and we suggest you leave on your will or else we will have to take a step to make you do so. We don't hesitate to say all these things. You had better take this threat seriously.”

Yıldız added that they brought the incident to the attention of a court after they received the letters.

A familiar incident had taken place on Sept 23, 2009, when a German prosecutor said he had been investigating a far-right party on suspicion of inciting racial hatred for sending letters to immigrant lawmakers asking them to leave the country.

Prosecutor Michael von Hagen stated then that they had opened an investigation based on suspicions of inciting racial hatred.

the response of far right is justified. There is no justification for the utter abuse which taking away homelands from white people is.