German media and celebs rally for refugees after ugly protests

Far-right protesters have targeted migrants and their accommodation with arson attacks, violent demonstrations and assaults 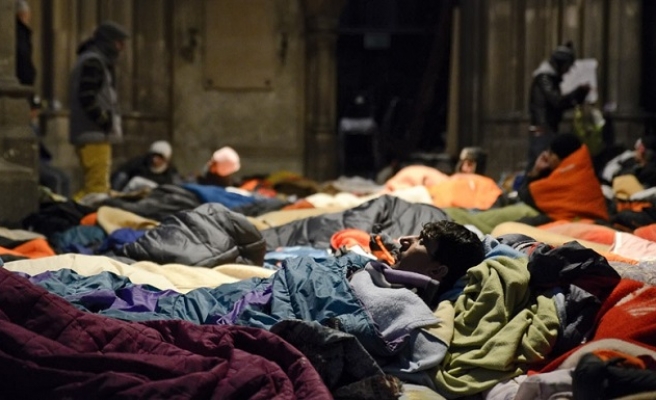 Germany may have witnessed violent anti-refugee protests this week -- but the message from the country's media and celebrities is a loud and determined welcome for people fleeing the horrors of war.

The tabloid, which has launched a high-profile charity campaign to assist refugees, added: "The whingers and the xenophobes don't speak in our name."

Germany is expecting an unprecedented 800,000 asylum-seekers this year as Europe grapples with its biggest migration crisis since World War II.

While many believe that Germany's wealth -- combined with the dark legacy of its Nazi past -- mean it has a unique responsibility to provide safe haven to the persecuted, not everyone has been happy to see refugee centres springing up across the country.

Far-right protesters have targeted migrants and their accommodation with arson attacks, violent demonstrations and assaults -- particularly in the former communist east, which still lags behind the west in terms of jobs and opportunities a quarter-century after reunification.

The eastern town of Heidenau has become a symbol of Germany's struggle to absorb the huge wave of arrivals, with dozens injured in clashes last weekend between police and extreme-right activists opposed to a new local refugee centre.

Chancellor Angela Merkel, visiting the centre this week, was booed by a crowd who called her a traitor.

In the media, though, many outlets have added their voices to Bild's in calling for refugees to be welcomed.

"It's up to us to decide how we're going to live. We have the choice," the magazine said.

In Munich, the Suddeutsche Zeitung newspaper offered its readers a practical guide for how to donate clothes and food to the new arrivals.

- 'Germany is rediscovering itself' -

A slew of celebrities, too, have come out to show support for people seeking new lives in Germany.

"Dear refugees, it's good that you're here," German Real Madrid player Toni Kroos said in comments reported by the press, "because it allows us to test our values and show respect to others."

The actor Til Schweiger is among the most prominent pro-migrant voices in German showbiz, while rock singer Udo Lindenberg is hoping to organise a major Berlin concert against anti-migrant hate, slated for October 4.

This is not the first time Germany has seen a spate of racist incidents -- nor the first time it has witnessed an outpouring of calls for tolerance in response.

In 2000, then chancellor Gerhard Schroeder called for an "uprising of decent people" after a synagogue was burned down in the western city of Duesseldorf.

Germany is "a tolerant and open country", Interior Minister Thomas de Maiziere insisted in an interview with the newspaper Die Welt on Saturday, blasting those who "believe they represent the silent majority when they prey on foreigners".

In an editorial entitled "Who we are", the paper said that in spite of the xenophobic attacks, the positive response from ordinary Germans is "changing the face of Germany", a nation that is "in the process of rediscovering itself" by welcoming large numbers of people in need.

In January, a survey by the non-profit Bertelsmann Foundation found the German public largely sympathetic to the refugees; 60 percent said they were ready to welcome the newcomers, up from 49 percent three years ago.

But the study also noted that the country remains divided on the question of whether immigration is an opportunity for Europe's economic powerhouse, or a burden.

In Dresden -- capital of the eastern Saxony state that has borne the brunt of the anti-migrant violence -- thousands took to the streets on Saturday to take a stand against the xenophobic attacks.

"Say it loud, say it clear, refugees are welcome here," they chanted.