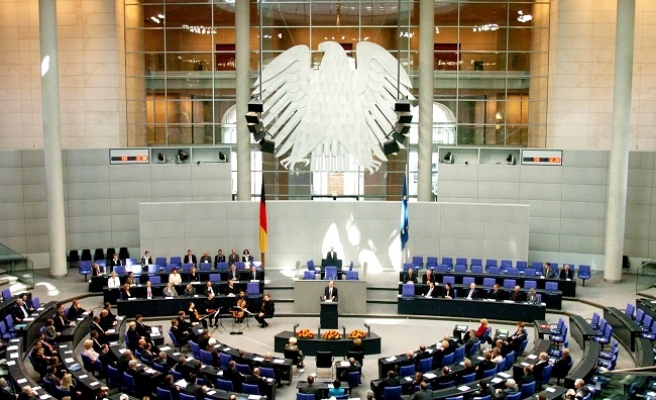 Christian Democrat lawmaker Clemens Binninger, who heads the eight-member committee at Bundestag, told Anadolu Agency that they will re-examine murders, bomb attacks and robberies committed by the NSU between 2000 and 2011.

"All members of our committee have doubts as to whether the NSU was really comprised of only three people," Binninger said, referring to the widespread suspicion that the group had been supported by a larger network.

"We also have doubts as to whether a total of 27 acts; 10 murders, two bomb attacks, 15 bank robberies in a period of 11 years, had been committed only by two suspects," he added.

The NSU killed eight Turkish immigrants, a Greek worker and a German policewoman between 2000 and 2007, all apparently without arousing the suspicions of the German police or its intelligence services.

The German public first learned about the existence of NSU in November 2011, when two members of the group Uwe Mundlos and Uwe Böhnhardt reportedly died in a murder-suicide incident following an unsuccessful bank robbery.

The third member of the group, Beate Zschaepe, turned herself in to police a few days later, and has been the main suspect in the ongoing NSU trial in Munich.

Federal prosecutor’s office concluded in 2013 that the NSU was founded by the trio and four other suspects have supported them, apparently without knowing their plans for murder.

But an independent observation group NSU-watch disputes the findings, and argues that the NSU had been supported by a wider network of right-wing extremists.

A police report submitted to the first parliamentary investigation committee in 2013 revealed that around 129 far-right extremists had connections to the NSU members.

At least 24 of them were informants of the German intelligence organizations, according to the NSU-watch.

Binninger said parliamentary investigation committee will examine whether the informants of the intelligence services really had no information about the murders and the whereabouts of the NSU suspects.

"But we have big doubts about the claim that none of the informants had any information on the whereabouts of the NSU suspects during this 11 years," he added.

The NSU terrorist cell is believed to have been founded by three right-wing extremists, Uwe Mundlos, Uwe Böhnhardt and Beate Zschaepe, who lived underground from 1998 with fake identities.

Since the late 1990’s, Germany’s domestic intelligence agency, or BfV, recruited various informants from the right-wing scene who are believed to have had contacts with the trio.

But the agency failed to prevent the murders or arrest the suspects.

For years, Germany’s police and intelligence service excluded any racial motive for the murders and instead treated immigrant families with alleged connections to mafia groups and drug traffickers as suspects in the case.

Binninger said he understands the frustration of the families of the victims, who still don’t know why their family members are targeted by the neo-Nazi group.

"Now we will ask all the questions, I do not want this to be an issue of speculation in the next 20 years," he said.

"We cannot promise that we will provide all the answers. But we can promise to relatives of our Turkish citizens, families of the victims that we will do everything to find the answers," he said.

The German federal parliament had launched its first inquiry into the NSU murders in early 2012 and the committee completed its work in August 2013, before elections in September that year.

Following recent revelations on the NSU, all political parties at the parliament agreed in Nov. 2015 to form a second investigation committee on the far-right terrorist cell.

The first hearings of the witnesses were held in Bundestag last week.