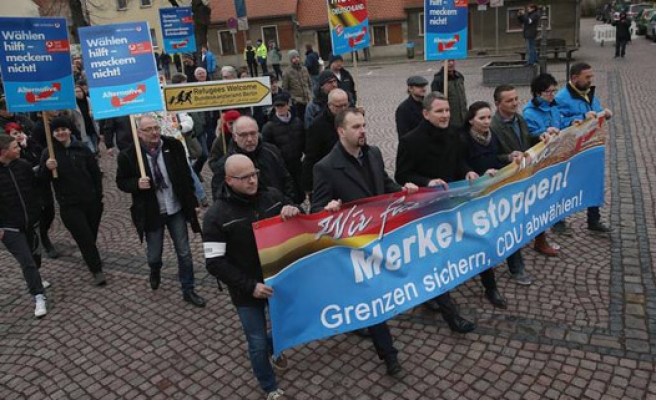 German populist party AfD was caught in a new storm Thursday after it emerged that a recently elected Berlin deputy had called refugees "disgusting worms" while another key member sold Nazi paraphernalia.

AfD candidate Kay Nerstheimer was elected on Sunday to Berlin's state parliament, but quickly came under pressure over controversial posts he made on Facebook as well as his background as a former member of the far-right German Defence League.

After labelling Syrian refugees "disgusting worms" last year, he said this year that asylum seekers were "parasites which are feeding off the German people", national media reported.

Public outrage over the offensive statements forced the Berlin chapter of the AfDto distance itself Thursday from Nerstheimer, who had garnered one in four votes in the capital's suburban electoral district of Lichtenberg 1.

The party decided to drop him from its parliamentary group, but he would still be able to keep his seat in Berlin's parliament as an independent deputy, said Ronald Glaeser, spokesman for AfD's Berlin chapter.

The AfD, however, has not launched any proceedings to kick Nerstheimer out of the party altogether, he added.

Mueller, who is the AfD's lead candidate for next year's state elections in the western state of Saarland, was selling money from Nazi concentration camps and swastika medals at his antiques shop, the reports said.

An undercover buyer for Stern was able to buy both items at the shop while another posing for ARD did so a few days later.

Under German law, it is illegal to trade in Nazi paraphernalia.

Saarland authorities on Thursday said they have launched an investigation against Mueller over the reported sale.

Reacting to the accusations, Mueller told ARD that he did not know that trade in swastika medals was against the law, although he acknowledged that it was "not befitting" for a leading candidate of the AfD to be making such sales.

He defended the sale of banknotes from concentration camps, saying it only "generated small amounts that adds to sales of other regular items."

The AfD was formed more than three years ago by economics professor Bernd Lucke as an anti-euro party.

But Lucke was forced out of the party this year, heralding its transformation into an anti-migrant and Islamophobic party, capitalising on public anger over the million refugees who arrived in Germany last year.

It rejects being labelled as an extremist or neo-Nazi party, but its members have been caught out for offensive speech on several occasions.

Different factions within the party are also jostling for power, with the more moderate branch led by co-chief Joerg Meuthen, while joint leader Frauke Petry is seen as pandering to the far-right wing.

The rivalry between Meuthen and Petry burst into the open in July when one of the party's regional lawmakers, Wolfgang Gedeon, sparked a storm with anti-Semitic remarks, including calling Holocaust deniers "dissidents".

Meuthen then threatened to step down from the AfD state assembly if Gedeon failed to quit, while Petry did not openly condemn Gedeon's comments.

The controversies have not halted a surge in support for the party.

It is now represented on the opposition benches of 10 of Germany's 16 state assemblies, and is eyeing seats in national parliament when the country holds general elections next year.

Latest surveys credit it with backing of around 14 percent nationwide.