The Help Organisation for National Political Prisoners and their Families (HNG) is, say German authorities, a threat to society and works against the constitution. 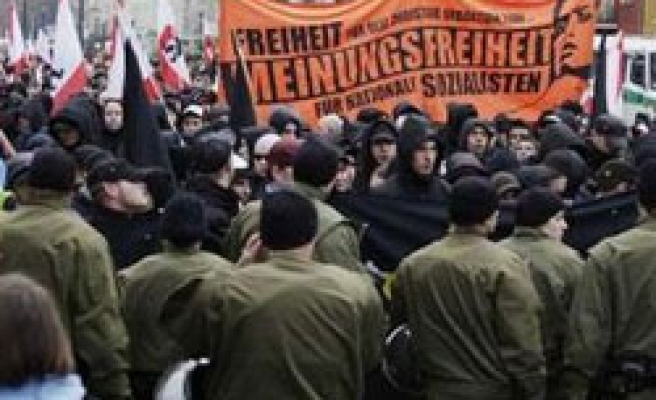 Germany has banned its largest neo-Nazi association, the HNG, which supports prisoners with far-right views and their families, the Interior Ministry said on Wednesday, the government's latest step to curb the influence of radical groups.

The Help Organisation for National Political Prisoners and their Families (HNG) is, say German authorities, a threat to society and works against the constitution.

With the slogan "A front inside and outside", the HNG seeks to reinforce prisoners' right-wing views and motivate them to continue their struggle against the system, said the ministry.

"It is no longer acceptable that imprisoned right-wing extremists are being strengthened by the HNG in their aggressive stance against the free, democratic order," Interior Minister Hans-Peter Friedrich said in a statement.

"By rejecting the democratic constitutional state and glorifying National Socialism, the HNG tried to keep right wing radical criminals in their own milieu," the ministry said.

The group, founded in 1979, has some 600 members. The ban follows raids in which police seized material from leading HNG members across Germany.

Although far-right groups attract most support in the eastern states, where unemployment is high and prospects few, the raids took place in western states including Bavaria and North Rhine-Westphalia.

Germany's domestic intelligence agency has said that far-right groups have in the last few years sought to use the financial crisis and euro zone debt crisis to prove that the capitalist system has failed.

The ban comes two weeks after the far-right National Democratic Party (NPD), which espouses the end of parliamentary democracy, regained seats in the state assembly of Mecklenburg-Vorpommern. It is also represented in Saxony.

Germany has banned several right-wing groups in the last few years but critics say the government needs to do more to weed out extreme views which permeate society.

"It is a sensible, if overdue, step to ban a criminal organisation like the HNG," said Anetta Kahane, head of the Amadeu Antonio Foundation which supports projects to boost civil society.

"But we need to do more to educate people so that they can resist right-wing ideas. For example, judges and the police need to be educated to deal with extremists," she told Reuters.

"The problem of neo-Nazis has not gone away."