In the cartoon mouthpiece of Greek Prime Minister Alexis Tsipras' Syriza party, Schaeuble says "we insist on soap from your fat" and "we are discussing fertilizer from your ashes" 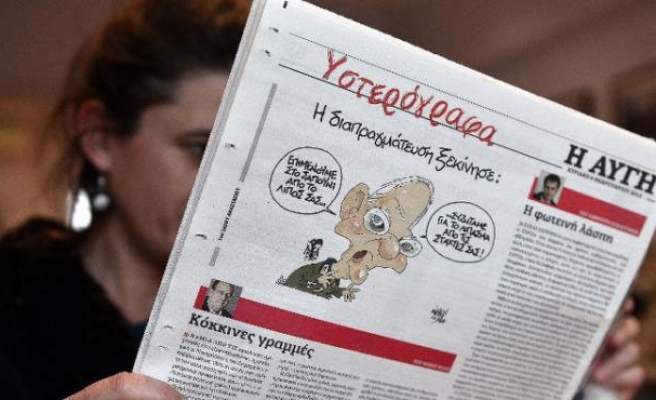 Germany condemned on Friday a cartoon published in a Greek leftist newspaper close to the new ruling party in Athens that depicts Finance Minister Wolfgang Schaeuble in a Nazi uniform making comments that invoke the Holocaust.

In the cartoon, carried in the daily Avgi (The Dawn), mouthpiece of Greek Prime Minister Alexis Tsipras' Syriza party, Schaeuble says "we insist on soap from your fat" and "we are discussing fertilizer from your ashes", references to the fate of Jews in the Nazi death camps of World War Two.

"I always uphold the principle of free speech but on a very personal level I find this caricature offensive and the cartoonist should be ashamed," German finance ministry spokesman Martin Jaeger told a regular news conference.

Relations between Germany, Europe's paymaster, and debt-ridden Greece have become particularly strained since the Jan. 25 election that swept the anti-austerity Syriza to power.

Earlier this week, during a visit to Berlin, Greece's new foreign minister pressed his government's claim for World War Two reparations over Nazi Germany's brutal occupation of his country. Germany says all reparation issues have been settled.

During Greece's years-long debt crisis, anti-austerity protesters have often depicted German Chancellor Angela Merkel in a Nazi uniform or with a Hitler moustache. Schaeuble has long been a leading advocate of the tough austerity programme.

Avgi captioned the cartoon on the back page of its Feb. 8 edition "Negotiations have begun", in a nod to talks held in Brussels over how Greece can shift to a new support programme.

Athens agreed on Thursday to talk to its creditors about the way out of its hated bailout in a political climbdown that could prevent Tsipras' government running out of money as early as next month.