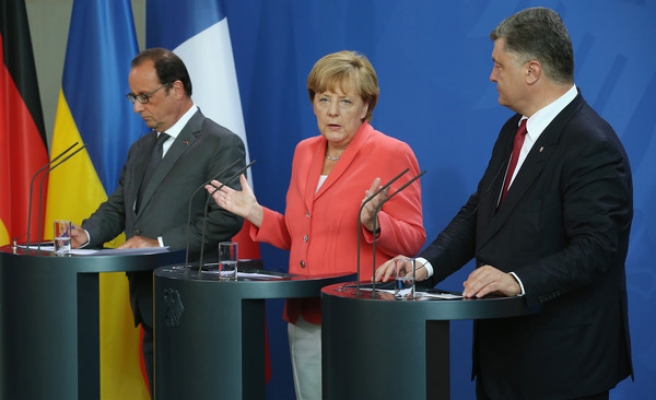 “The Minsk ceasefire agreement is not implemented in full. And this leads to new victims,” Merkel said at a joint press conference with Hollande and Ukrainian President Petro Poroshenko after their talks in Berlin.

“Now, the first and most important task should be to take every step to ensure that the ceasefire agreed upon in the Minsk agreement becomes a reality,” Merkel stressed.

Despite the pledges made by parties in February to end fighting, cease-fire violations have increased in recent weeks, particularly in the areas of Donetsk, Horlivka and Mariupol in Donbas.

At least seven civilians and 20 Ukrainian troops were killed in the latest uptick of violence in eastern Ukraine last week.

French President Hollande called on parties to stick to the promises made by the Minsk Agreements.

“Heavy weapons and other light weapons should be withdrawn in line with the Minsk agreement,” he said.

Ukrainian President Poroshenko criticized Russia and pro-Russian separatists for not respecting the ceasefire deal, but expressed commitment for the Minsk agreement.

However, he raised reservations about the planned elections in the regions controlled by the pro-Russian separatists, saying this contradicts Ukraine’s election law.

Merkel expressed regret for the lack of agreement among the conflict parties over the constitutional reform and elections, as foreseen at the Minsk agreement.

She described planned democratic elections in regions controlled by separatists as a "key element" of a political solution and said that their talks in the coming days would focus on these issues.

Merkel dismissed speculations over a format change on the Ukrainian talks and said the three leaders may also have a four-party Normandy format meeting with Russian President Vladimir Putin in the coming days, if they will consider such a meeting necessary.

Merkel, Hollande, Ukrainian President Poroshenko and Putin held their first talks on the Ukrainian crisis in “Normandy”, France in June 2014, on the 70th anniversary of the D-Day landings.

Since then, parties held various four-party meetings at the level of leaders, foreign ministers and senior diplomats, called as “Normandy format” talks.

More than 6,000 people have lost their lives and 1.4 million people were internally displaced in the conflict between Ukrainian forces and the pro-Russian separatists since April 2014, according to the United Nations.