World War Two reparations have resurfaced as an emotional issue in Greece, where many blame Germany, their biggest creditor, for painful austerity and record unemployment 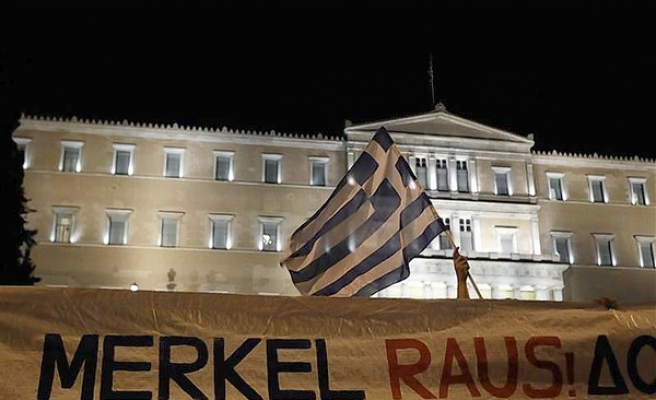 German President Joachim Gauck dismissed Greek demands for compensation for Nazi-era crimes during a symbolic visit to Greece on Thursday, and instead offered to set up a new fund to remind Germans of their past.

World War Two reparations have resurfaced as an emotional issue in Greece, where many blame Germany, their biggest creditor, for painful austerity and record unemployment associated with two international bailouts.

Acting under opposition and media pressure, the Greek government revived last year a long-dormant quest for war reparations but has not adopted claims raised by some parties and war-victim groups putting the bill at 162 billion euros, about half Greece's total government debt.

Gauck acknowledged on Thursday that Germany carried a "moral debt" for dozens of massacres committed by Nazi soldiers in anti-guerrilla reprisals during the war, but reiterated that Berlin was not willing to discuss reparations.

"I believe the legal way for it is closed," he said during a joint appearance with 84-year-old Greek President Karolos Papoulias, a former wartime resistance member who said the two states should start talks on the issue "as soon as possible".

Gauck said Germany would instead set up a new "Future Fund" to foster the memory of Nazi war crimes in Greece.

"It will dispose substantial sums to make Germans confront that part of their past," he said without offering details on the fund's size or purpose.

Germany denies owing anything to Greece for World War Two after the 115 million deutsche marks it paid in 1960, one of 12 war compensation agreements it signed with Western nations.

But Athens has said it always considered that money as only an initial payment, with the rest of its claims to be discussed after German reunification, which eventually came in 1990.

Several experts and historians regard the claims put forward by Greek opposition and lobby groups as unfounded or overblown.

Greece's fragile coalition government - which is eager to repair often fraught relations with Germany - accepts the claims must be pursued but refuses opposition calls to use them as a bargaining chip in the debt-laden country's bailout talks.

Athens has still not decided on the diplomatic way in which it will pursue the claims, deputy Foreign Minister Akis Gerontopoulos told parliament, responding to opposition charges that the government was dragging its feet over the issue to avoid angering the Germans.

"We will not give up anything we are entitled to," Gerontopoulos said.