Steinmeier said he feared that neither Russia nor Ukraine could now control forces unleashed as fighting intensified around the pro-Russian stronghold of Slaviansk. 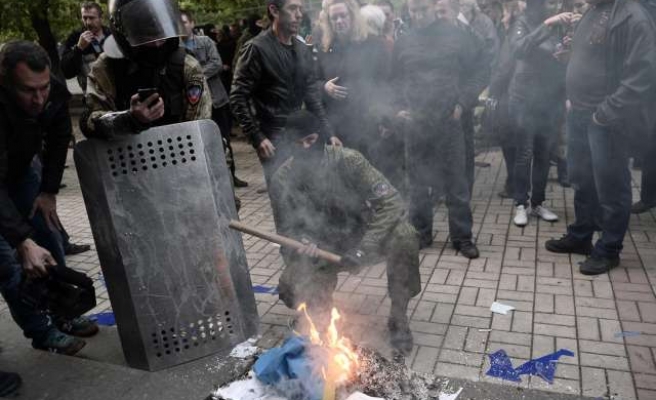 Dozens of people died in the Ukrainian city of Odessa last week when pro-Russian militants clashed with their opponents, and Kiev forces are fighting separatists who have seized control of towns in the east of the country.

"The bloody pictures from Odessa have shown us that we are just a few steps away from a military confrontation," Steinmeier told El Pais, Le Monde, La Repubblica and Gazeta Wyborcza. He added that the conflict had taken on an intensity "that a short time ago we would not have considered possible".

Steinmeier's ministry also warned Germans on Tuesday against travelling to Crimea, which Russia annexed from Ukraine in March, and reiterated an earlier advisory to avoid eastern areas.

"It is urgently advised to avoid travelling to Crimea," the Foreign Ministry wrote on its website. "In the German government's view, Crimea belongs to Ukraine but in actuality it is controlled by Russia. Due to the current situation German citizens can no longer be guaranteed consular services."

The ministry added that it was advising against any travelling to eastern and southern Ukraine. It also urged German citizens to leave those regions and said journalists were particularly endangered.

"The situation in the east and south of Ukraine is extremely tense at the moment," it said. "There are an increased number of armed occupations of state buildings .... there have been incidents of foreigners being held.

In a television interview late on Monday, Steinmeier said he feared that neither Russia nor Ukraine could now control forces unleashed as fighting intensified around the pro-Russian stronghold of Slaviansk.

"I'm convinced we are struggling against a situation that has taken on a dynamic of its own. There are groups in eastern Ukraine that are not listening to either Kiev ... or Moscow."