Germany to give 'special IDs' for 'suspicious' Muslims

The Minister for Internal Affairs, De Mizier, said that Muslims who are suspected of fighting in Syria or Iraq will have their ID cards taken away within 18 months. 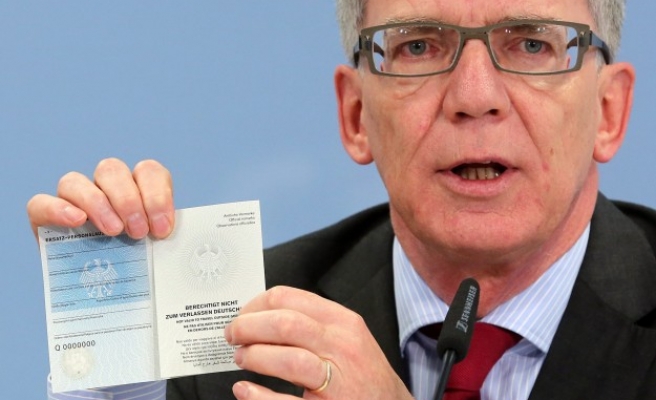 In Germany Muslims who are suspected of illegal activities will be given special ID cards, a system that is reminiscent of Nazi Germany and their treatment of Jews.

In order to prevent the return of those who fight in Syria or Iraq, the ID cards of suspect individuals will be taken away from them. The Federal Internal Affairs Minister Thomas de Maiziere who has prepared a legal draft, has said that those who appear to be engaging in suspicious activity will have their ID cards taken away within 6 months. This will be then separated into two lots of 6 months.

Those whose cards have been confiscated will be able to pay 10 Euro for an ID paper which can be extended twice for 6 months each time. Even with this paper they will be banned from leaving the country.

Coming together for a meeting over a month ago, Federal and State ministers have agreed on the issue of ID confiscation, however the details had not been finalised. The Federal Internal Ministers said that having such a law in place on current ID cards would not have been able to prevent fake cards.

The draft law that was prepared by the Ministry of Internal Affairs, was put in place because of the risk of those returning from Syria and Iraq would post a threat in radicalising other Muslims.

Up to this time in order to prevent people to going to Syria and Iraq, passports were withheld. However according to new information, many were travelling to Turkey and passing into Iraq or Syria successfully. In this way 450 fighters had joined ISIL.

During World War II, Hitler had brought in a law forcing those of Jewish faith to wear armbands with the Star of David and this eventually separated the population. The ID that will be confiscated will cost the government 400,000 Euro.