Berlin urges Moscow to honor commitments made for cease-fire in eastern Ukraine, warning of more sanctions if it flouts them. 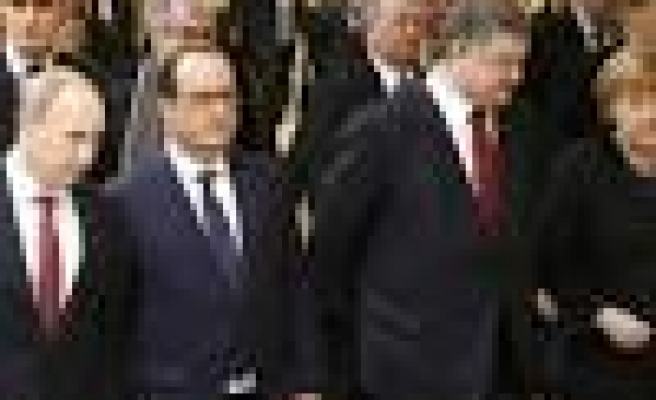 World Bulletin / News Desk
Germany has urged Russia to stick to the new eastern Ukraine cease-fire deal agreed in Minsk and warned of fresh sanctions if the deal is not respected.

The announcement on Friday came a day after the leaders of Germany, Russia, Ukraine and France agreed truce, after 17 hours of negotiations in the Belarusian capital of Minsk.

German government spokesman Steffen Seibert said at a press conference in Berlin: "The EU and its member states are keeping all options open for a possible response."

"We will continue our engagement for the success of the Minsk process, but we are also aware of the fact that there can be difficulties during the process, which may also necessitate our responses."

The cease-fire between Ukraine and pro-Russian separatists is set to go into effect at midnight on Saturday.

But fresh violence in the region has led to uncertainties over the hard-won deal.

At least eight Ukrainian soldiers have been killed and another 34 wounded during clashes less than 48 hours before the cease-fire, according to Ukraine’s Counterterrorism Center.

German government spokesman Seibert said earlier on Friday that the Minsk agreements was only the beginning of a long path full of difficulties and possible pitfalls.

Seibert said: "We are under no illusions here."

"This is a glimmer of hope. Words now need to be backed up by deeds."

German Chancellor Angela Merkel said on Thursday, following an informal meeting of European leaders in Brussels, that the European countries may decide on fresh sanctions if the cease-fire deal was not respected by Russia.

The cease-fire agreement includes the withdrawal of heavy weaponry from combat areas, the withdrawal of all foreign-armed formations and release of all hostages and unlawfully detained persons, as well as political reforms and decentralization in the eastern Ukrainian regions.

The Ukrainian government and pro-Russian separatists had previously signed a cease-fire agreement in Minsk on Sept. 5, 2014, but both sides repeatedly violated it.

European leaders accuse Russia of supporting the conflict with arms and ammunition, while Russia says the U.S. and EU have deliberately destabilized Ukraine to expand the west's military presence in Eastern Europe through NATO.