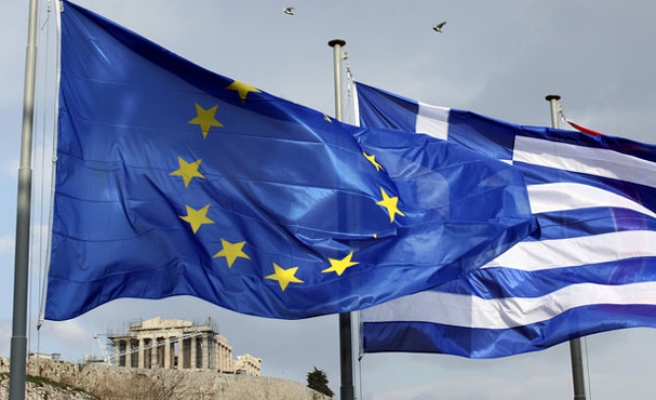 Greece has made sufficient progress to warrant an end to financial restrictions when a program that reviews its bailout deal expires next August, the head of the Eurogroup said Monday.

“No further conditions at the end of the program, no further restrictions.” Jeroen Dijsselbloem told reporters after meeting Greek Finance Minister Euclid Tsakalotos.

Following separate talks earlier with Prime Minister Alexis Tsipras, Dijsselbloem, who is also the Dutch finance minister, said “a lot of work has been done, and the news is good, not just for Greece but also for the euro zone.”

The two men agreed the program review should end as soon as possible.

In a separate announcement, the European Council said it would end it excessive deficit procedure for Greece after eight years -- a decision reached during a meeting of the General Affairs Council.

Greece's finances have stabilized, the Council said in a statement, leading the group to repeal its 2009 decision about excessive deficit,

"The Council has closed the excessive deficit procedure for Greece. It confirmed that the country's deficit is now below 3 [percent] of GDP, the EU's reference value for government deficits, it added.

"After many years of severe difficulties, Greece's finances are in much better shape,” said Estonian Finance Minister Toomas Toniste. "We are now in the last year of the financial support program, and progress is being made to enable Greece to again raise money on the financial markets at sustainable rates.”

Official data show Greece's fiscal balance has steadily improved from a deficit of 15.1 percent of GDP in 2009 to a 0.7 percent surplus last year.

Although a small deficit is projected for 2017, the fiscal outlook is expected to improve. The debt-to-GDP ratio peaked at 179 percent in 2016 and is expected to decrease in coming years.

The improving financial picture may have come at a price too steep for average Greeks, according to critics and at least one investment advisor who spoke to Anadolu Agency.

“Greeks are becoming poorer every year” the advisor said on condition of anonymity in an email.

“The deficit has turned into a small surplus, exclusively due to the huge increase of taxes and decrease of social government expenses (pensions etc), but in order to give a real boost to the economy, measures that favor investments need to be taken from now on” she said.

The country’s banking system is now stronger than in recent years, she conceived but cautioned that it cannot be fully stabilized until non-performing loans are addressed. That figure in January stood at 800 million euros.

Athens, which has signed three bailout deals since 2010 amounting to 260 billion euros, has promised international lenders it would move forward with reforms by shrinking and modernizing its administration to cut costs and improve efficiency.

Greece must now must fulfill its 95 pre-requisites by the end of the year with reforms that have to do mostly with labor laws and pensions -- its biggest hurdle in negotiations with creditors.