Greek Finance Minister Yanis Varoufakis will tell major investors and bankers later on Monday that Greece will be able to service its debt with no damage done to private investors, a source with knowledge of the matter said. 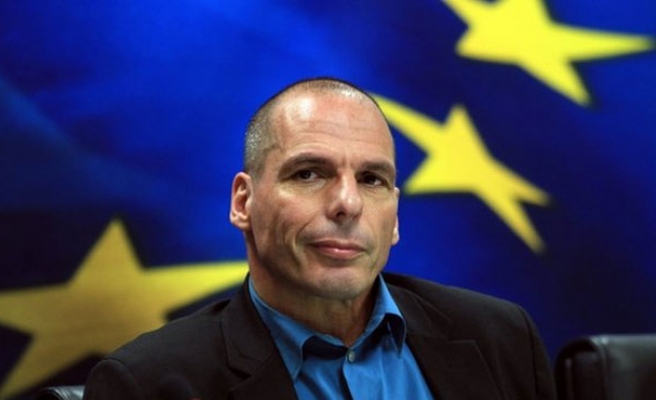 Greece's new government has proposed ending a standoff with its international creditors by swapping its outstanding debt for new growth-linked bonds, Finance Minister Yanis Varoufakis was quoted as saying on Monday.

Varoufakis, in London to reassure investors he is not seeking a Wild West-style showdown with Brussels over a new debt agreement, told the Financial Times that Athens would no longer call for a write-off of Greece's 315 billion euros ($360 billion) of foreign debt.

Instead it will seek a "menu of debt swaps" including two types of new bonds - one indexed to nominal economic growth and one he called "perpetual bonds" to replace European Central Bank (ECB)-owned Greek bonds, the newspaper reported.

"What I'll say to our partners is that we are putting together a combination of a primary budget surplus and a reform agenda," Varoufakis told the FT.

"I'll say, 'Help us to reform our country and give us some fiscal space to do this, otherwise we shall continue to suffocate and become a deformed rather than a reformed Greece'."

Athens planned to target wealthy tax-evaders and post primary budget surpluses of 1 to 1.5 percent of gross domestic product, he told the paper, even if it meant his party, Syriza, could not fulfil all the spending promises on which it was elected.

Varoufakis met international investors in the evening. Michael Hintze, founder and CEO of hedge fund CQS, asked afterwards if the minister had proposed a debt swap, said "It's more balanced and broader than that," without elaborating.

A Greek government source said earlier in the day that Varoufakis would tell the investors they had nothing to worry about.

"We will be able to service the Greek debt on terms that will have no detrimental impact on, especially private, bond holders," said the source who spoke on condition of anonymity due to the sensitivity of the matter.

Germany's Finance Minister Wolfgang Schaeuble told Reuters in an interview earlier on Monday that Berlin would not accept any unilateral changes to Greece's debt programme.

"We want Greece to continue going down this successful path in the interests of Greece and the Greeks but we will not accept one-sided changes to the programme," he said at the Reuters Euro Zone Summit.

The finance minister and Greece's new Prime Minister Alexis Tsipras are touring European capitals in a diplomatic offensive to replace Greece's bailout accord with the European Union, ECB and International Monetary Fund, known as the "troika".

Varoufakis said he was confident he could reach a negotiated settlement soon, telling Britain's Channel 4 news it was time to stop Greece being a "festering wound" on Europe and dismissing a suggestion the ECB could block a new deal.

After a tumultuous first week in which the left-leaning government indicated it intended to keep campaign promises to ditch the tough austerity conditions imposed under its existing bailout, the emphasis this week appears to be on maintaining that a new deal is still possible.

"We are in substantial negotiations with our partners in Europe and those that have lent to us. We have obligations towards them," Tsipras said at a news conference in Cyprus during his first foreign visit as prime minister.

When asked whether Greece would seek aid from Russia, which is a worsening standoff with Europe and the United States over Ukraine, he said: "Right now, there are no other thoughts on the table." Germany said Russia would not be a viable substitute.

Greece, unable to borrow on the markets and facing pressure to extend the current support agreement when it expires on Feb. 28, is looking for a bridging deal to provide breathing space to propose a new debt arrangement.

Exactly how much time Athens has to reach a deal with its creditors remains to be seen. In theory, there are only weeks left: once the bailout expires at the end of February, the ECB could be obliged to pull the plug on funding for Greek banks. In practice, however, an alternative interim funding mechanism for the banks may be found.

After that, Greece has large debt payments due in March, although officials say it could have enough cash on hand to meet them, avoiding a crunch until later in the spring.

Tsipras repeated calls already made by Varoufakis for a mechanism of inspections by experts from the "troika" overseeing Greek finances to be dismantled and replaced by direct negotiations between Athens, the EU and IMF.

"I believe that this would be a mature and necessary development for Europe," he said.

"The German government sees no reason to scrap this mechanism of evaluation by the troika," Finance Ministry spokeswoman Christiane Wirtz said in Berlin.

Varoufakis, an outspoken economist who has likened EU austerity policies to "waterboarding", began his European tour over the weekend in Paris, where the centre-left government is thought to be more sympathetic than others to the case for relaxing lending conditions.

He then moved to London to meet international investors whose confidence is crucial, saying he was not in "a kind of Wild West showdown" with the EU, but aimed to strike a mutually beneficial deal to minimise the cost of the crisis for the average European.

French Finance Minister Michel Sapin said after meeting Varoufakis that Athens could not expect a straight debt write-off, but left the door open to other options that include giving Athens more time for repayment.

Varoufakis met about 100 banks and financial institutions in London. An organiser said one of the meetings had to be moved from a upmarket London members' club, because Varoufakis wouldn't wear a tie.

After meeting him, Britain's finance minister, George Osborne, called the stand-off between Greece and the euro zone "the greatest risk to the global economy".

"I urge the Greek finance minister to act responsibly but it's also important that the euro zone has a better plan for jobs and growth," Osborne said.

On Tuesday, Tsipras will meet Italy's Prime Minister Matteo Renzi, a young centre-left leader thought to be among those most sympathetic to calls for leniency. He sees European Commission President Jean-Claude Juncker and French President Francois Hollande on Wednesday. So far no date has been set for a meeting with German Chancellor Angela Merkel, although they will meet at a European summit on Feb. 12.